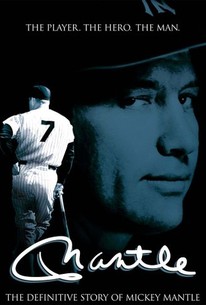 The remarkable life of baseball's most beloved icon comes to the screen with the kind of loving attention to detail only achieved by the respectful, sports-loving documentary filmmakers at pay-cable giant HBO. Filmed in part to commemorate the tenth anniversary of the legendary switch-hitter's death, this film tells the remarkable tale of the athlete who overcame constant, nagging injuries to blast 536 home runs out of the ballpark over the course of 18 unforgettable seasons and swing his way into the history books. A charming country boy who would beat the odds to become the toast of New York, Mickey Mantle's charmed life came to a tragic end when, as he was receiving an operation to replace his damaged liver, doctors discovered that the baseball great had inoperable cancer. As filmmakers speak to the people who knew Mantle best, including his teammates, his sons, his wife Merlyn, and sportscaster Bob Costas, baseball fans are afforded the rare opportunity to watch from the stands as history is made in the ballpark.

There are no critic reviews yet for Mantle. Keep checking Rotten Tomatoes for updates!

There are no featured reviews for Mantle at this time.