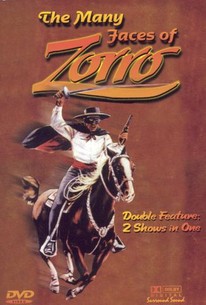 Many actors have donned the telltale mask of justice worn by the sword and whip-wielding do-gooder over the years, and through it all, audiences sat captivated by the eternal struggle between the downtrodden masses and corrupted elite -- for no matter who portrayed the legendary Zorro, the breathtaking adventure and inspiring message of hope has been a constant staple of the long-running film series. Now viewers can discover the moves that made Zorro a screen legend through interviews with Mask of Zorro choreographers Anthony de Longis and Tim Weske as well as stars of numerous earlier Zorro adventures. Featuring rare, never-before-seen footage in addition to interviews with Mask of Zorro stars Antonio Banderas and Sir Anthony Hopkins, this release is a treat for any fan of the crime-fighting swordsman.

Critic Reviews for The Many Faces of Zorro

There are no critic reviews yet for The Many Faces of Zorro. Keep checking Rotten Tomatoes for updates!

There are no featured reviews for The Many Faces of Zorro at this time.

The Many Faces of Zorro Quotes