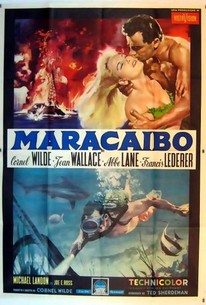 Maracaibo was actor Cornel Wilde's second directorial effort. Wilde casts himself as troubleshooting oil man Vic Scott, who has arrived in Venezuela to help put out a fire at an offshore well. It's a ticklish situation: if Scott fails, not only will he die in the blaze, but all of Maracaibo will likely be destroyed. When he isn't risking his life, Scott romantically pursues ice-princess journalist Laura Kingsley (played by Jean Wallace, at the time Mrs. Cornel Wilde). Joe E. Ross of Car 54 Where are You fame provides a few welcome laughs as a Brooklynese oil rigger. Filmed partially on location, Maracaibo was based on a novel by Stirling Silliphant.

There are no critic reviews yet for Maracaibo. Keep checking Rotten Tomatoes for updates!

There are no featured reviews for Maracaibo at this time.