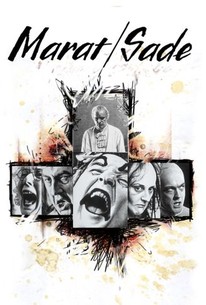 Adaptation of Peter Weiss's searing allegory of the freedom of the individual battling against the demands of society. A group of upper-class Parisians in the time of Napoleon visit the insane asylum at Charenton, where the institutionalized Marquis de Sade leads the inmates in a play he's written, which depicts the assassination of the revolutionary Jean-Paul Marat by Charlotte Corday. Film debut of Glenda Jackson.

Carol Raymont
as Patient
View All

Brook has achieved the very difficult. He has taken an important play, made it more immediate and powerful than it was on the stage, and at the same time created a distinguished and brilliant film.

Marat/Sade seems to me more theatre than drama. It is perhaps a lesser achievement for that reason, but in the hands of Peter Brook and... the Royal Shakespeare Company, theatre is raised to a height of proficiency that confers its own delight.

The centre fails to hold, and increasingly the emotive devices of the production seem to be lashing around in an intellectual straitjacket.

Though not as powerful as the play, even if there's the same director and performers, it still connects with a modern audience.

There are no featured audience reviews yet. Click the link below to see what others say about Marat/Sade!