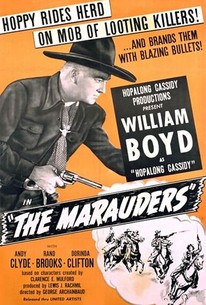 There's oil in them thar hills in this late entry in the long-running Hopalong Cassidy Western series. Or, rather, there is oil under an abandoned church in the ghost town of Coltsville. On their way back to the Bar 20, Hopalong Cassidy (William Boyd) and his two sidekicks, California Carlson (Andy Clyde) and Lucky Jenkins (Rand Brooks) seek shelter from a storm in that very same church. They are awakened by church organist Susan Crowell (Dorinda Clifton) and her mother (Mary Newton), who explain that both church and town were abandoned after a series of mysterious killings. Along with Deacon Black (Ian Wolfe), the Crowells are the only inhabitants left in Coltsville. The next morning, a wrecking crew headed by Riker (Harry Cording) arrives to tear down the church, which is defended by Hopalong Cassidy and his friends. During a lull in the siege, Hopalong Cassidy does a bit of snooping around and learns the truth about the ghost town. Armed with this new knowledge, our hero returns to Coltsville and unmasks the real culprit behind both the killings and the attack of the church.

There are no critic reviews yet for Marauders. Keep checking Rotten Tomatoes for updates!

There are no featured reviews for Marauders at this time.