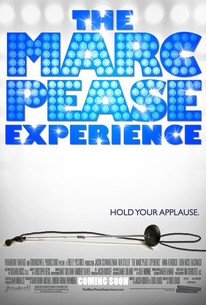 Ten years after graduation, a former high school musical superstar who insists on living in the past discovers that there's more to life than the bright lights of Broadway as his former teacher and mentor prepares for a particularly chaotic opening-night performance. Jason Schwartzman and Ben Stiller star in a comedy co-scripted by Jacob Koskoff and director Todd Louiso.

Like Schwartzman, Stiller devotes aptly excessive attention to the portrayal of a character too invested in trivial pursuits himself. It's the movie's one decent joke, but, in the absence of laughs, the most the actors can draw from it is a mere grin.

This is a slight and unessential picture, but its quirky, compassionate tone seems destined to attract a cult following, and members of high-school drama clubs everywhere will be riveted.

The Marc Pease Experience is likable enough; it's just no Rushmore.

Consider: A bad movie about cheesy a cappella and awful musical theater. What could be more excruciating?

It's badly written and inertly directed, with actors who don't have a clue what drives their characters.

No character is worth caring about, worth pitying, worth paying attention to; no dilemma they face is too petty.

No wonder Paramount Vantage decided to bury this.

If anyone were going to like The Marc Pease Experience, it would be me, and I didn't.

so bereft of anything close to humor that one wonders if it was even meant to be a comedy in the first place.

As pointless and obnoxious as someone pulling on your ears.

absolute waste of time why ben stiller put he's name to this is beyond me.

The Marc Pease Experience is a typical underdog story with the atypical Schwartzman at the helm, producing a unique adventure into the life of what appear to be normal people. Without Stiller, Marc Pease would truly feel like the low budget film that it is, but with the star power Marc Pease comes off more like the film Election, with Matthew Broderick and Reese Witherspoon. Regardless of what draws you to the film, The Marc Pease Experience remains a solid little comedic production.

"Okay, here's what you don't understand: things just don't stay the same. Not on their own they don't. It's like grandma used to say: "If you leave the door wide open, everyone's just gonna walk right out." Just like Rob Gentry did!" Former high school musical star, Marc Pease, finds himself still living in the past, eight years after graduating.

REVIEW
Often compared to Rushmore but is not exactly on the same level of Wes Anderson's earlier masterpiece, The Marc Pease Experience hits a couple of high notes with a playful Ben Stiller with the killer mane and Jason Schwartzman as Max Fisher-lite playing teacher and student respectively, Anna Kendrick also stars. The script is passable, its peppered with funny moments but fails to maintain its hilarity the whole way. The movie hits its high point when Jason's character Marc Pease serves as proxy to an injured performer and kills it with the closing musical number for "The Wiz". Funny moments here and there but didn't exactly find its rhythm, The Marc Pease Experience is a watchable treat for those looking for a good night's chuckle.