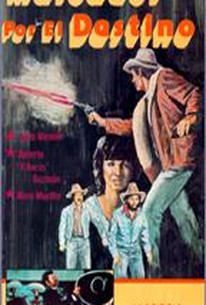 The English-language title of this Mexican-Spanish coproduction is Blinded by Fate. At first, the film focusses on three Mexicans, whose dreams of striking it rich in America are doomed to failure. Eventually, the story narrows down to the travails of one of the three, played by Julio Aleman. Branded with a false criminal charge, Aleman knows that he will never be able to hold his head up with pride in Mexico or America if he does not clear himself. A sad story, told with moments of unexpected delicacy. ~ Hal Erickson, Rovi

There are no critic reviews yet for Marcados Por El Destino. Keep checking Rotten Tomatoes for updates!

There are no featured reviews for Marcados Por El Destino at this time.