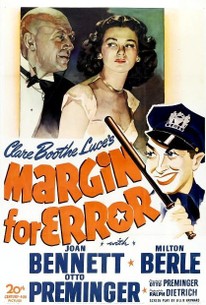 Clare Booth Luce's once-timely stage comedy Margin for Error was indifferently transferred to the screen in 1943. Milton Berle stars as Moe Finkelstein, a Jewish Brooklyn policeman assigned to guard Nazi consul Karl Baumer (Otto Preminger) in pre-WW II New York. Baumer is not only an anti-Semitic brute, but he's also a crook, siphoning off German consulate funds for his own use. His perfidy is well known by his wife Sophie (Joan Bennett), who married Baumer only to save her family from a concentration camp, and by Baumer's assistant Baron von Alvenstor (Carl Esmond). Thus, when Baumer is found dead of poison, stabbing and gunshot wounds, Sophie and the Baron are immediately suspected of murder. But Finkelstein comes to the rescue by piecing together the clues and coming up with a bizarre, but credible, solution to the crime. Having previously directed himself as Karl Baumer in the Broadway version of Margin for Error, Otto Preminger felt qualified to do the same in the film version: as a result, Preminger has no one but himself to blame for his shamelessly hammy performance.

Critic Reviews for Margin for Error

Margin for Error is a film at war with itself.

Gets a poor treatment on screen.

There are no featured reviews for Margin for Error at this time.