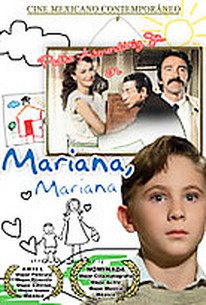 Carlos (Luis Mario Quiroz) is best friends with Jim (Juan Carlos Andrews) and has a crush on his friend's mother Mariana (Elizabeth Aguilar). Carlos' mother (Saby Kamalaich) and father (Aaron Hernan) do not approve of Jim as they question his mother's moral fiber. When they are upset that Carlos spends the night at Jim's, Carlos ditches school and declares his love for Maria. The story unfolds in flashback as the adult Carlos (Pedro Armendariz) recalls his childhood while mired in a Mexico City traffic jam. ~ Dan Pavlides, Rovi

There are no critic reviews yet for Mariana, Mariana. Keep checking Rotten Tomatoes for updates!

There are no featured reviews for Mariana, Mariana at this time.