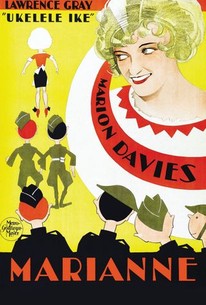 Marion Davies made her talkie debut in this early musical romance set during World War I. Marianne (Davies) is a beautiful French girl who is engaged to marry a soldier fighting on the front. However, she soon attracts the attentions of Pvt. Stagg (Lawrence Gray), an American soldier fighting in France. Marianne is infatuated with the dashing Yank, yet remains faithful to her intended. But when her fiancé returns from the war blind and embittered, Marianne wonders if she might have been better off with Stagg. Marianne also features Cliff Edwards (also known as Ukulele Ike), Benny Rubin, and George Baxter; Arthur Freed, later a top producer of musicals at MGM, co-wrote the song "Blondy" that is sung by Lawrence Gray in the film.

There are no critic reviews yet for Marianne. Keep checking Rotten Tomatoes for updates!

There are no featured reviews for Marianne at this time.