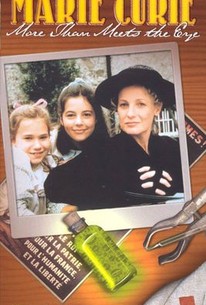 This video tells the story of Marie Curie who twice won the Nobel Prize for her scientific research. The Polish-born French chemist shared the 1903 Nobel Prize with her husband Pierre Curie, for their work on radioactivity. In 1911, Madame Curie won a second Nobel prize for her discovery and study of radium and polonium. Richard Mozer produced and directed this film to teach children about people who have made a difference in other peoples' lives, and to inspire them to do the same. The story has a fictionalized framework, involving two sisters who are suspicious that their mysterious neighbor is a war spy. By the end of the film, they are all friends, when the girls' father is saved by Curie's new X-ray machine and her correct diagnosis.

Critic Reviews for Marie Curie: More Than Meets the Eye

There are no critic reviews yet for Marie Curie: More Than Meets the Eye. Keep checking Rotten Tomatoes for updates!

There are no featured reviews for Marie Curie: More Than Meets the Eye at this time.