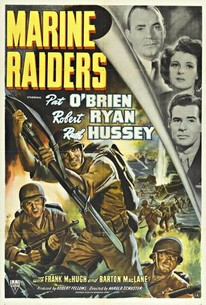 In this wartime propaganda film, two Marine officers and their company go on leave when the Army takes over during the Guadalcanal invasion. Their leave is spent in Australia where one of the officers falls in love with a woman. His pal, afraid that there will be no turning back for his buddy, receives orders that send them both back to the US to train recruits. Naturally, his enamored friend is quite upset by this sudden turn and refuses to talk to his pal until a subsequent mission gives them the chance to stop briefly in Australia. There the lovers are finally wed, just before he goes to battle.

Edward Woods
as Officer on Ship

Barry Macollum
as Innkeeper
View All

There are no critic reviews yet for Marine Raiders. Keep checking Rotten Tomatoes for updates!

There are no featured reviews for Marine Raiders at this time.