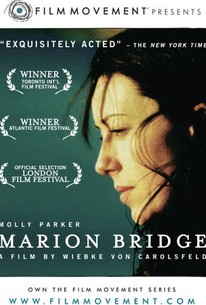 Thee adult sisters are forced to face the scars of their past as they wait at their mother's deathbed in this drama written by noted Canadian actor Daniel MacIvor. Agnes (Molly Parker) grew up in Sydney, a small town in Nova Scotia; hoping to get away from memories of an unhappy childhood, Agnes moved to Toronto, where she found more than her share of disappointments. When Agnes receives word that her mother Rose (Marguerite McNeil) is in failing health, she returns to Sydney for the first time in years, where she's met by her sisters, Theresa (Rebecca Jenkins), who has been turned bitter by a bad divorce, and Louise (Stacy Smith), who prefers withdrawing into herself to dealing with the outside world. As the four women attempt to make peace with one another, Agnes decides it's time they faced several unpleasant truths, including the abuse they faced at the hands of her father. The first directorial effort from Wiebke Von Carolsfeld, Marion Bridge was screened in competition at the 2002 Toronto Film Festival as part of the "Perspective Canada" series.

A respectable addition to the tragic three sisters oeuvre.

Takes the raw ingredients of soap opera -- the spilling of family secrets and the opening of old wounds as a parent slips away -- and spins them into something truthful and quietly compelling.

While the situations and characterizations ring true, if a bit melodramatically, the film is so understated that little dramatic effect registers.

Parker is very good at conveying Agnes' wobbly mixture of instability and emotional bravery, and Jenkins finds the sad, lonely ache below Theresa's urge to regiment the lives of everyone in the family.

Too many scenes are colourless and unimaginative...There's a gap between the pedestrianism of life and the necessary dramatic tension of art [that] this film never bridges.

Given Marion Bridge trots out almost every cliche of the chick flick, it is all the more remarkable that it works as well as it does.

The flick takes its sweet time to deliver the unsolvable life situations in a delicate, real way -- playing out like a good book -- and the solid cast is totally in sync with its rhythm.

[von Carolsfeld's] instincts -- to trust an audience; to be patient and poetic -- are exactly right.

A trip through the mysterious dynamic of mothers, sisters and complicated families. Layered and darkly optimistic.

A highly emotional look at three sisters dealing with the impending death of their alcoholic mother, while repairing their relationships with each other and with their past. Terrific acting on the part of all concerned. Agnes (Molly Parker) seems to have sustained the most damage, and has developed strong coping skills while living away, in Toronto. Theresa (Rebecca Jenkins) is the older sister who remained behind and feels responsible for what remnants of their former life can still be found. Louise (Stacy Smith) is the youngest sister, who seems strangely detached from life and has difficulty connecting to those around her. Parker is spectacular and raises the stakes, causing the performances of all three to resonate believably well together. There is harmony in the performances, even as the dissonance of their past keeps making an appearance. The rural, Canadian seacoast scenery creates the atmosphere against which this plays out. Strong direction gave the viewer enough information concerning the past to make the interactions believable without revealing too much. Rather than serving it all up on a platter, one has to dig in to find the nuggets that lead to understanding. But the viewer is rewarded with a film that will lift the spirits as well as evoke a strong reaction to what brought these women to this place.