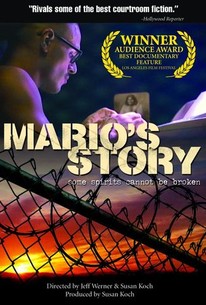 A young man wrongly convicted of murder struggles to prove his innocence in this documentary from filmmakers Jeff Werner and Susan Koch. Mario Rocha was 16 years old and a student at a Los Angeles high school when he was charged with the murder of a classmate, Martin Estevez. During his trial, prosecutors suggested that Rocha had gang affiliations that would have provided a valid motive for the killing; however, after the fact, it was proven that Rocha was not a member of any gang. Despite this, Los Angeles city attorneys were eager to convict Rocha as part of a drive to "get tough" on gang-related crime, and a number of observers seriously questioned the competence of Rocha's lawyer, Anthony Garcia, into question, factors which led to a conviction against the youngster. While behind bars, Rocha began honing his skills as a writer as he sought to find legal representation that would join the fight to give him a new trial. When attorneys from the respected law firm of Latham and Watkins agree to take on Rocha's case free of charge, they successfully campaign for a new trial and then methodically gather the evidence that will prove Rocha did not commit the crime. Mario's Story was screened in competition as part of the 2006 Los Angeles Film Festival.

There are no critic reviews yet for Mario's Story. Keep checking Rotten Tomatoes for updates!

There are no featured audience reviews yet. Click the link below to see what others say about Mario's Story!