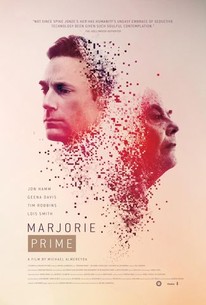 Eighty-six-year-old Marjorie spends her final, ailing days with a computerized version of her deceased husband. With the intent to recount their life together, Marjorie's "Prime" relies on the information from her and her kin to develop a more complex understanding of his history. As their interactions deepen, the family begins to develop ever diverging recounts of their lives, drawn into the chance to reconstruct the often painful past. Built around exceptional performances from a veteran cast, Marjorie Prime shines a light on an often-obscured corner in the world of artificial intelligence and its interactions with mortality. Bringing us robustly into the future, Michael Almaryeda's poetic film forces us to face the question-If we had the opportunity, how would we choose to rebuild the past, and what would we decide to forget?

It's a topical treatise on memory and artificial intelligence that asks how the human brain works (or doesn't).

Hamm is note-perfect in the role, programmed to be charming and empathetic but prone to gaucheness when someone wrong-foots his software.

... a clever and affecting meditation on memory, bereavement, love and remorse masquerading as a sci-fi movie.

An elegant, absorbing and stimulating experience.

A high-concept idea with a low concept approach, Marjorie Prime is cerebral, talk-driven sci-fi lit up by a compelling exploration of big ideas and across-the-board strong performances from the small cast ...

Marjorie Prime is a movie about memory but it's also a movie about identity, arguing convincingly eloquently that the two are synonyms.

Captivating, haunting, and ultimately quite moving.

A captivating work that unfolds like wisps of memory, desperately looking to the past for answers, companionship, common experience.

Marjorie Prime leans heavily on its source material and performers. It's a great shame, then, that the intriguing premise, though not quite squandered, falls short of its promise.

The acting performances are all excellent. However, the film shows its origins as a stage play, scarcely opening out from its single, soulless location.

The film is saved by the acting (which is largely fantastic), Mica Levi's haunting score, and the ... ending, which is the only time I feel Marjorie Prime takes the risks it needs to come alive.

I expected Marjorie Prime to present me with some sort of philosophical quandary, however, I expected that quandary to relate to the standard robot stuff: Identity, humanity, what it means to be alive, that old chestnut. Instead, Marjorie Prime philosophises about memory, and beyond that, truth. Still doesn't stop it from being pretty crap though.

In a gentler future than the one's proposed by Skynet artificial intelligence has it's metaphorical hands full just trying to figure us out, much less be our friend. A quiet,sedate, adult offering with meaty chunks to chew over and meditate on, this is best perhaps enjoyed on a rainy day. Resonant and smart. Intuitive.

An often fascinating science-fiction meditation on memory and one that proves that the genre doesn't need a large budget or even special effects to be convincing. Lois Smith remains a national treasure.

THE INSISTENCE OF MEMORY - My Review Of MARJORIE PRIME (3 Stars) Sometimes the stage is a better setting for meditations on a theme, where nuance is often sacrificed in order to play to the back rows. Film has the possibility of being a more kinetic art form, so when something gets slowed down to the intimate pacing of a couple of people sitting in a room talking, it requires much more patience than what regular multiplex visitors have. Such is the case with MARJORIE PRIME, the new film written and directed by Michael Almereyda (NADJA, EXPERIMENTER, HAMLET) based on the play by Jordan Harrison. It's a very slow, contemplative piece about memories and the needs they fulfill in our lives. Stay attuned to its thoughtful rhythms and you may be richly rewarded. Others will definitely see this as a snoozefest, but like a really good snoozefest. Lois Smith, a veteran actor so great in TRUE BLOOD, plays Marjorie, an elderly woman whose recollections of the past have started to fade. Tended to by her daughter (Geena Davis as Tess) and son-in-law (Tim Robbins as Jon), they live in a quasi-futuristic society in which holograms of loved ones have a continued presence in the family in order to provide companionship and a chance at recovering lost memories. Jon Hamm plays the hologram of Walter, Marjorie's late husband, but her choice was to have him appear as he did in his 40s. It plays out like a genteel version of HUMANS or an extremely melancholy episode of BLACK MIRROR. Everyone must teach Walter about the past. He's a fast learner, building his RAM from each conversation. He's a reasonable facsimile of the real thing, but not perfect. Enough perhaps to satisfy Marjorie. For anyone who has ever lost a loved one, the conceit of this film will prove to be enormously touching. I remember when my mother was passing away, she kept wondering if she would get her younger, healthier body back in the afterlife. It's how she remembered herself at her best. Same goes for Marjorie. Walter was at his best when he looked like Jon Hamm...go figure! As the story progresses, an inevitability sets in. I won't spoil its twists and turns, but Almereyda uses thoughtful, subtle transitions to indicate the passage of time. They reminded me of the ones Richard Linklater used in BOYHOOD. There's a much bigger emotional impact when you see a puppy turn into an adult dog in one edit rather than read a boring "5 YEARS LATER" title card. Most of the dialogue is strictly on-the-nose. These quiet, fragile characters talk a lot about the past and what it meant to them. The script doesn't really deviate from its themes. The characters, as well acted as they all are, don't have a lot of layers, but that one layer is all passion. One minor disappointment for me was the score. Mica Levi has certainly made an indelible impression in her short composing career with stellar work in UNDER THE SKIN and JACKIE. Here, she elongates some dissonant string notes and calls it a day. It's a lumbering bore of a score, unmemorable and one that makes the film a bit of a slog. The film also has what I disparagingly call the "large kitchen island syndrome", where the characters live in a lush, sterile environment. It's a bit on the bland side, but one that forces you to simply concentrate on the script's thoughtful ideas. To counter this, Almereyda and cinematographer Sean Price Williams (GOOD TIME) make wonderful use of the weather, with rain and snow adding their perfect sprinkles of atmosphere. Yes, it's mostly a filmed play with just enough cinematic elements to qualify as a movie. It's just people sitting and talking, which is revolutionary for a sci-fi film, and its ideas will have meaning to anyone who has ever looked back on their lives. It asks important questions, such as, are the exact memories as important as the ability to remember anything at all? Not a terrible thing to contemplate.