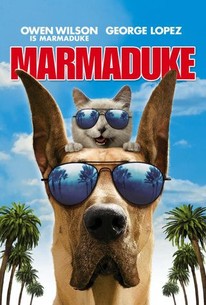 Critics Consensus: Dull and unfunny, Marmaduke offers family filmgoers little more than another round of talking animals and scatological humor.

Critics Consensus: Dull and unfunny, Marmaduke offers family filmgoers little more than another round of talking animals and scatological humor.

Critic Consensus: Dull and unfunny, Marmaduke offers family filmgoers little more than another round of talking animals and scatological humor.

When advertising exec Phil Winslow (Lee Pace) gets an offer to head the account for a California-based dog-food company, he uproots his wife (($Judy Greer}), three kids, and their beloved Great Dane, Marmaduke (voiced by Owen Wilson), from Kansas to the Sunshine State. Once there, the big canine befriends a group of mutts at the local dog park, but after a surfing competition brings Marmaduke celebrity, he turns his back on his new pals. Eventually, a disaster helps the oversized hound and Phil learn about the importance of family and friendship. ~ Perry Seibert, Rovi

Jason Bryden
as Man on Bench

Critics Consensus: Get Him to the Greek Is Certified Fresh

That Marmaduke makes a point of farting when Phil and Debbie kiss sums up the film's level of appeal.

Spectacularly sentimental, full of ridiculous computer-animated action, and makes sure its animals are a good deal less pallid than the humans on view.

Better than Cats & Dogs, but praise hardly comes much lower.

Fans of the single-panel cartoon that has run in newspapers since the 1950s will find plenty to disappoint them in this live-action adaptation.

Dogs may be for life but the memory of this film will last about 20 seconds.

Dog farts seem to be the meat and potatoes of the writers' funny bones.

It's so incredibly bland and inoffensive that it's really tough to actually call it a bad film.

As talking animal movies go Babe set the benchmark for me and this isn't in the same ball park ... but the small children in the audience were very still suggesting that any animal with something to say deserves their attention. It just didn't hold mine.

a gross mis-use of CGI animals

Marmaduke sinks to Beverly Hills Chihuahua levels of awfulness and only reaffirms that talking animals aren't funny -- they're boring.

The comic strip character of Marmaduke wasn't exactly calling for a motion picture. But give a film a recognisable name and you can sell anything. Marmaduke follows the adventures of a dog and his family as they move from Kansas to California. The dog is a little prick. He purposefully causes problems, such as ruining the house, hurting people, and making a mess. He enjoys acting this way. He breaks the fourth wall and talks to us but we don't care. I don't want to hear from him. He sucks. Early on Marmaduke farts and says he is juvenile. That's the film in a nutshell. It's filled with a voice cast hoping they wont be recognised and that you'll leave before the end credits. Obviously Wilson and Sutherland are unmistakeable, but I think the rest should be named and shamed. Steve Coogan, Emma Stone, Christopher Mintz-Plasse. Hand your heads. As Marmaduke and co go on a series of adventures, in one of which Marmaduke turns into a raging racist and starts hating on half-breeds. Unfortunately he doesn't go the way of Voldemort. Meanwhile the humans are involved in a very dull plot involving marketing for an organic pet food company. Pace plays the kind of father who is constantly beaten down. His family would rather he risk his job and look for their dog instead of going to an important meeting. The comedy is atrocious. I keep hearing the argument that this is for kids. Then why does it reference dozens of adult films? Almost Famous, Midnight Cowboy, The Elephant Man. These are just a few stolen lines that make no damn sense at all. There's also two drug references. This is really scraping the bottom of the barrel, with outdated and simplified lessons on life, and a sudden climax involving a road collapsing. It was horrible.

about as good as a movie about talking dogs can be:-)

Good Movie and the voices were right on perfect. Nice story very simple. Marmaduke, the world's most lovable Great Dane, leaps from comic strip fame (appearing in 600 newspapers in over 20 countries) to big screen stardom in this family comedy event. A suburban family moves to a new neighborhood in Orange County, California with their large yet lovable Great Dane, who has a tendency to wreak havoc in his own oblivious way. But its not all living large for the Duke, who finds that fitting in with his new four-legged friends - and a potential romantic interest - isn't always easy for a super-sized teenage dog. Owen Wilson gives the beloved Great Dane his voice in the film, which also features the voices of Fergie, George Lopez, Emma Stone and Kiefer Sutherland.