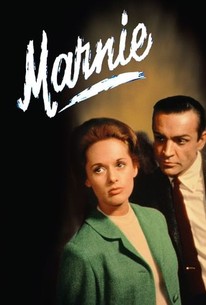 Critics Consensus: A coolly constructed mystery revolving around a character who's inscrutable to a fault, Marnie finds Hitchcock luring audiences deeper into the dark.

Critics Consensus: A coolly constructed mystery revolving around a character who's inscrutable to a fault, Marnie finds Hitchcock luring audiences deeper into the dark.

Critic Consensus: A coolly constructed mystery revolving around a character who's inscrutable to a fault, Marnie finds Hitchcock luring audiences deeper into the dark.

One year after she appeared as Melanie Daniels in Alfred Hitchcock's thriller, The Birds, actress Tippi Hedren took on another Hitchcock role in this unusual psychological drama. Marnie Edgars (Hedren) is a scheming young woman who repeatedly finds employment as a secretary and then proceeds to rob her employers. Though she changes her disguise, her new boss Mark Rutland (Sean Connery), a business associate of one victim, recognizes her. Mark proves to be a bit unusual himself and, instead of reporting her to the police, is intrigued by her criminal behavior--as well as her bizarre aversion to touch. Mark slowly uncovers the events in Marnie's past that have caused her antisocial behavior. Taken from Winston Graham's best-selling novel, Jay Presson Allen adapted Marnie to the screen. Allen would go on to create many more unusual female protagonists for the screen and stage.

Milton Selzer
as Man at Track

Hitchcock's elegant cinematic style, evident here and there, seems wasted in a melange of banal dialogue, obtrusively phony process shots, and a plot that congeals more often than it thickens.

Hitchcock was criticised for bring shallow psychology into the film (Hedren's character is afraid of the colour red) but some of their exchanges - the film was based on a novel by Winston Graham - are sharp and droll.

This remains a compelling Hitchcock thriller but it's Tippi Hedron's remarkable central performance which steals the show.

Universally despised on its first release, Marnie remains one of Alfred Hitchcock's greatest and darkest achievements.

Marnie is the character study of a thief and a liar, but what makes her tick remains clouded even after a climax reckoned to be shocking but somewhat missing its point.

Marnie is Alfred Hitchcock's forty-ninth film. It might be the most perfectly tooled yet.

It is a film of such complexity that, after three viewings, I feel that I have hardly begun to understand it, but each time, new layers of meaning have revealed themselves.

Calmer reflection has established this as one of Hitchcock's more fascinating "misfires."

Marnie is Hitchcock's darkest work. The director's vicious trip through the mind of a disturbed woman offers little in the way of respite, but captures the attention through intrigue, and the sheer filmmaking abilities of the master of suspense.

I think the main thematical implication of Hitchock's [Marnie] is exactly that. The constant confusing morality of leaving the viewers take control as he himself hasn't got it under his spell.

One of Hitchcock's later films, this has the beginnings of the psychologically disturbed young woman genre, surrounding one woman tormented by something she can't really remember. This was also used as a plot device in the very famous made-for-TV movie "Sibyl" and later horror films, but is used here to fuel the story of an unloved and criminally insane young woman. Marnie herself is a very interesting character, because instead of being marred by her past and becoming a timid young thing, she becomes a kleptomaniac, a rogue thief, and a sly underdog compared to Sean Connery, who arrives to calm her memories and make her whole once more. Though she is obviously a repressed character, both cunningly criminal and flawed, she is not shown as vulnerable. Instead of being truly empathetic to Marnie as a character, the film allows the character of Mark to swoop in and become her savior in a matter of minutes while also proving to be her jailer, and also her salvation. While it is true that Marnie is, again, repressed, Mark acts as a repressive force himself. He gives her a home and money, which he believes that she steals for her own survival, and acts as if he is doing her a service, while blackmailing her into marriage. He goes go on to almost rape her, hits her, and threatens her with police action and more violence. Mark also helps her confront her repressed demons, eventually becoming her love interest. By eliminating a psychotherapist from the book and replacing them with Mark, there is a lack of balance to their "relationship." Because of the lessening of characters from the book to the film, it becomes much more pointed a narrative and loses any dynamism, becoming a cretinous love story. The only relationship explored with any affinity, and shows an empathy towards Marnie's plight, is between her and her mother. Their relationship is portrayed as an embittered and loathsome one, full of lies and without the caring a mother should exhibit. That proves to be the best aspect of the film and somewhat of its saving grace, if you can get past the Neanderthal portrayal of Mark.

This movie is decent. I definitely wouldn't consider it one of Hitchcocks best films....

Hitch considers warped feminine mystique while entertaining his own warped sensibilities (naturally, and why not? ... his are okay, yah?) in this never boring look at a soul pulled back from the cliff of the lost by the hunter/warden/lover? (Sean Connery, brooding respectable charisma). Tippi is Hitch's willing victim again, and charming at it.

Hitchcock started to go downhill with this one, it's true, but, even though this film is a bit of a mess, it's not a complete and total loss. Basically, we've got a super disturbed woman named Marnie who is a compulsive thief ansd pathological liar. She's pretty bi-polar and has all sorts of unresolved issues. She goes to work for a guy named Mark Rutland, and decides to rob him. Instead of turning her in, he's drawen to her, impulsively marries her, and becomes bound and determined to cure her of her mental issues. Not a whole lot of this makes much sense, and the pop psycholigy at work here is pretty bad. Yet, despite the nuttiness and confusion of all of this, and the fact that it's really overblown and drawn out, I still sorta liked it. You've got a solid performance from Tippi Hedren, who really goes off the wall here, and Connery, though a bit creaky, does a decent enough job as Rutland. The plot itself isn't all bad, but the screenplay is in need of some serious work. It was kinda hard for me to buy some of what was presented here, namely character motivations and the answers to Marnie's troubles. The film does look good though, and there's some excellent shots and sequences throughout, especially the safe robbery sequence. It's fairly suspenseful and pretty well done. Also, Bernard Herrmann's score (the last one he did for Hitch, I think) is also pretty nice. The film is well meaning, but all over the place. Like I said, it's not a total failure, but it is pretty flawed. I was still entertained by it though, so take that as some sort of recommendation.