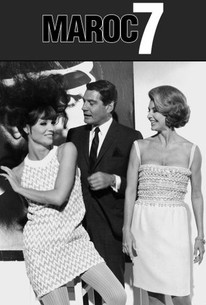 It's Funny Face meets Rififi in Maroc 7, starring Cyd Charisse as Louise Henderson, an editor for a slick and chic fashion magazine who utilizes her jet-setting life style as a front for an international jewel-smuggling operation. Abetting her in the scheme is the magazine's top photographer and high-fashion cover model. But instead of "Think pink" it's "Think clink" as secret agent Simon Grant (Gene Barry) is sent in to infiltrate Louise's organization. Posing as a safecracker, Simon convinces Louise to let him in to the gang's next operation: a plan to smuggle a priceless gem out of Morocco. ~ Paul Brenner, Rovi

Michael Haynes
as Another Man

There are no critic reviews yet for Maroc 7. Keep checking Rotten Tomatoes for updates!

There are no featured reviews for Maroc 7 at this time.