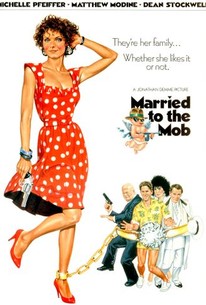 Married to the Mob Photos

Michelle Pfeiffer is Married to the Mob in this comedy. The wife of Mafia hitman Alec Baldwin, Pfeiffer regularly chastizes her husband for his underhanded line of work. Baldwin refuses to entertain any thoughts of quitting the mob-and besides, he's got a good thing going with Nancy Travis, the promiscuous girl friend of gang boss Dean Stockwell. When Stockwell catches on to Travis' peccadilloes, he murders both his mistress and the unlucky Baldwin. At Baldwin's funeral, Stockwell is overwhelmed by Pfeiffer's beauty, and immediately begins plying her with expensive gifts. But Pfeiffer is through with this sort of thing, and with her young son in tow, she leaves town, hoping to start life anew. Upon making the acquaintance of bumbling, seemingly sincere Matthew Modine, Pfeiffer is convinced that Modine is just another mob flunkey. But it's even worse: Modine is an FBI agent, ordered to get to Stockwell by using Pfeiffer as bait. Reluctantly (he's grown quite fond of her himself), Modine blackmails Pfeiffer into setting up a rendezvous with Stockwell.

Chris Isaak
as 'The Clown'

Frank Gio
as Nick `The Snake'

Captain Haggerty
as The Fat Man

Frank Ferrara
as Vinnie 'The Slug'

Gary Goetzman
as Guy at the Piano

Stanton D. Miranda
as Gal at the Piano

Bill Carter
as The Ambassador

Obba Babatundé
as The Face of Justice

News & Interviews for Married to the Mob

View All Married to the Mob News

Critic Reviews for Married to the Mob

Demme sees corruption-the potential for it and the indulgence of it-in everyone. Yet he doesn't neglect the humanity of the people in thrall to or trapped within those systems.

The results are very good - far better and funnier than most of what is being made these days.

Demme makes crystal-clear what some have suspected for quite a while: that there are few more luxurious movie pleasures than watching Michelle Pfeiffer when she's given a role worthy of her.

High-spirited and hilarious, Mob supplies that special kick you get from movie comedy when laughter bubbles over into bliss.

Demme's narrative has all the frantic intensity of a nightmare which with its constant shifts of pace and mood works beautifully both as a thriller and as comedy.

Pfeiffer is at her best, and there's plenty of action, although you may feel that some of the gags involving a scorned and vengeful wife (Mercedes Ruehl) are a bit shopworn.

It's a tonal gymnastics display that doesn't come around very often, making "Married to the Mob" special, assisted in great part by Demme's askew vision for this type of story.

It's good for a few chuckles, but no real laughs, and the predictable plot is not very compelling.

"Married to the Mob'' isn't for all tastes. But for cinematic thrills and spills, it's quite a ride.

The cast is superb - especially Mercedes Ruehl in over-the-top mode as Stockwell's brassy, jealous wife - and Demme keeps both the action and the laughs perfectly tuned.

If you're in the mood for mafia comedy with laughs and a rebellious women's viewpoint, check out Married to the Mob on tape or cable.

Audience Reviews for Married to the Mob

A surprise, as Pfeiffer warmly engages as the mob wife tired of the mob life. Caricatures, sure, but still vibrant, warm and fun. Coulda used more Ruehl and Cusack, but whatcha gonna do?

Not bad of comedy Mafia film, but Mercedes Ruehl's hilarious as a revengeful wife of a mob boss.

Married to the Mob Quotes