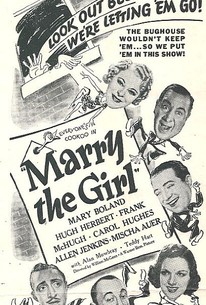 The disarmingly zany Marry the Girl was one of the better Hugh Herbert "B"-vehicles for Warner Bros. Much of the story takes place within the walls of the ramshackle newspaper syndicate owned by the screwball Radway family. Purportedly the head of the operation, John B. Radway (Hugh Herbert) is under the thumb of his domineering sister Ollie (Mary Boland), while his niece Virginia (Carol Hughes) schemes to abandon journalism in favor of marriage to eccentric caption-writer Dimitri (Mischa Auer). The rest of the plot is a hodgepodge of farce, misunderstandings, and slapstick, all tied in with the solemn pronouncements of psychiatrist Stryker (Alan Mowbray) -- who turns out to be as crazy as the rest. In one of the saner moments of Marry the Girl, a shotgun is fired, whereupon a gaggle of geese in a wall painting suddenly take flight (it's that kind of movie).

Hugh Herbert
as John B. Radway

William B. Davidson
as Drake

Critic Reviews for Marry the Girl

There are no critic reviews yet for Marry the Girl. Keep checking Rotten Tomatoes for updates!

There are no featured reviews for Marry the Girl at this time.