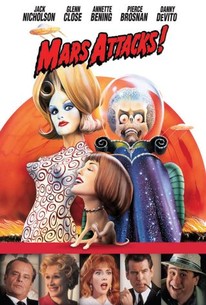 This quirky science fiction comedy is a characteristic feature by iconoclastic director Tim Burton, known to moviegoers for Beetlejuice, Edward Scissorhands, and The Nightmare Before Christmas. The storyline affectionately harkens back to the deadpan sincerity of such '50s and '60s science-fiction films as The Day the Earth Stood Still and War of the Worlds. Flying saucers have been reliably seen over the capitals of the world, and the whole world awaits with bated breath to see what will transpire. Among those waiting is the President of the United States (Jack Nicholson), who is assured by his science advisor (Pierce Brosnan) that the coming aliens are utterly peaceful. This advice is hotly contested by the military (led by Rod Steiger), who advices the President to annihilate them. When the aliens land, they are seen to be green, garish, and very cheerful. But appearances prove deceiving when the "friendly" aliens abruptly disintegrate the entire U.S. Congress. Hollywood notables appear in vast quantities in roles (and sub-plots) of all sizes in this zany feature. ~ Clarke Fountain, Rovi

Tom Jones
as Himself

John Finnegan
as Speaker of the House

Poppy
as Poppy
View All

A giddily madcap, surreal, sardonic satire that sets out to be deliberately cheesy.

Oh, those Martians! They are funny, mean little buggers, and they're worthing checking out.

The science-fiction comedy Mars Attacks! is a contrived B-movie pastiche with some spicy ingredients alien to other Tim Burton films: attitude, cynicism, misanthropy.

The cast is so large that most of the actors don't stick around very long, but each has his or her moment to shine.

Both a tribute to schlock sci-fi and a deconstruction of it, this sleekly cheeseball $70 million production is all attitude. It's not Burton's best by a long shot, but I came out smiling.

It's not the funniest, saddest, or most poignant film in Tim Burton's filmography, but it is a great deal of fun. (25th anniversary)

Mars Attacks! may well be the last whiff of that Burton magic so cherished by generations of angsty teens.

Director Tim Burton fashions a hilariously twisted form of the alien invasion movie by skewering every silly sci-fi flick that ever had a budget smaller than its brain.

Mars is a fireball of failure, a B-movie crammed full of A-list actors, an exercise in tacky self-indulgence that will numb you with its labored eccentricities. What's more, it would take a greater detective than I to find a single funny line.

[Mars Attacks!] works well enough, though never well enough to make up for the fact that Burton ultimately settles for less.

Yaaa-hooo! Now here's a alien movie for ya, yessiree! Burton's half-tribute, half nudge in the ribs to the old sci-fi of the 1950's not only does well, it surpasses it's subject matter and most of the current day items of the same ilk. Still crazy as well after all these years. Howzit get only a 52% on the damned tomatometer?!? Who are these mongoloids?

This may be one of Tim Burton's more underrated and lesser films, but this zany homage to cheesy 50s alien invader films is nonetheless very well done, hugely entertaining, and a whole lot of gleefully campy fun. It's actually rather dark and a little gruesome (this is a Burton film overall), but it comes across as kind of shocking since it is supposed to be a tribute film. The spirit of the old stuff remains, just in a revamped and glossy form better fit for the 90s. Still though, there's a lot of good gags, and the overall look and special effects are just awesome. As a bonus, they still hold up pretty nicely, too. The star studded cast is pretty awesome, and they generally do a good job, and it's clear they're having a lot of fun and not taking themselves too seriously, and that's a good thing. Probably the best part of the cast for me, besides the inclusion of two blaxploitation stars, is the inclusion of the voice of Slim Whitman, which is used to great effect in a wonderfully inspired solution to the problem of the invading aliens. All in all, a fun movie I definitely recommend.

A superb cast including Jack Nicholson, Danny Devito and Tom Jones is topped with the unique humour that is created by Tim Burton. While the Martians are cruel, the have some superb scenarios that may unsettle you or have laughing along with it. Think of 'Mars Attacks!' as a tribute to B-Movies of the 1950's and you may enjoy this.