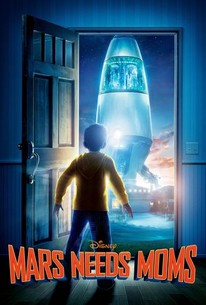 Critics Consensus: The cast is solid and it's visually well-crafted, but Mars Needs Moms suffers from a lack of imagination and heart.

Critics Consensus: The cast is solid and it's visually well-crafted, but Mars Needs Moms suffers from a lack of imagination and heart.

Critic Consensus: The cast is solid and it's visually well-crafted, but Mars Needs Moms suffers from a lack of imagination and heart.

Take out the trash, eat your broccoli-who needs moms, anyway? Nine-year-old Milo (Seth Green) finds out just how much he needs his mom (Joan Cusack) when she's nabbed by Martians who plan to steal her mom-ness for their own young. Produced by the team behind Disney's A Christmas Carol and The Polar Express, Mars Needs Moms showcases Milo's quest to save his mom-a wild adventure in 3D that involves stowing away on a spaceship, navigating an elaborate, multi-level planet and taking on the alien nation and their leader (Mindy Sterling). With the help of a tech-savvy, underground earthman named Gribble (Dan Fogler) and a rebel Martian girl called Ki (Elisabeth Harnois), Milo just might find his way back to his mom-in more ways than one. Based on the Book by Berkeley Breathed. -- (C) Disney

Joan Cusack
as Mom
View All

As with a good live-action movie, it all begins with the script, and this one is solid-well thought-out, briskly paced, funny and sweet. In the end, it's the finished film that matters, not the process...

What really sells this fabulous, kid-friendly 3D adventure to anybody over eight (no offense, kids) is its astonishing visuals, which uses motion-capture technology to a degree that surpasses what we saw in Avatar.

The credited director is Simon Wells (The Time Machine), but the grotesque characters and dark action bear the Zemeckis stamp.

Children are unlikely to enjoy it, and parents will be aching for a few stiff drinks in a Mars bar long before it's over.

Mars Needs To Work Out How To Animate Humans So They Don't Look Like Possessed Shop Window Dummies.

It's an interplanetary clunker.

A decent flick that could have been so much more.

I just love Simon Wells' sense of adventure and with Mars Needs Moms, he soars.

With a more inventive storyline, Mars Needs Moms could have been an out-of-this-world cinematic experience. As is, the animated film offers an entertaining romp that will play best to the preschool and grade-school set and, yes, their moms.

Here is a movie that seems at war with the notion that animation can inspire or invigorate.

Amy Curtis
We Got This Covered
View All Critic Reviews (116)

Unfortunately, one of those mass produced computer animated affairs (it seems like there's a ton of 'em) that finds actual storytelling a bothersome detail. What remains is a work that looks and sounds as if it were made for the kiddies but in actuality was made specifically for the moms of those kiddies, a little bit of encouragement for simply being moms (which, as I understand it, is a thankless job, or so I've heard), if not for only listening to toddler conversation for weeks at a time. If that was the case, why not actually write something for those moms with some meat in it instead of only breast milk?

wow. the film features an interesting concept, and then does whatever possible to muck it up. a total train wreck. one of the worst kids movies i have ever had the displeasure to sit through.

Oh dear. This was an incredibly lifeless effort. Mocap shows that it has a long way to go to capture humanity. This seems like the Mocap film least in need of being in the form. It's a story of a boy that is your usual asshat kid. Then his mom is captured by aliens and he realises how much he loves her. The film is mostly dull, with very repetitive landscapes used. Foggler has some great chances for emotional connection as a stranded kid, but he messes it up by just being a very poor imitation of Jack Black. And even Jack Black can't be Jack Black anymore. Seth Green was screwed over by having his voice completely replaced. I'm sure this is false advertising as the trailers had his voice. The film also fails to slow down, with constant chasing and shouting. In the end the main reason this film fails is because of its confusing messages. If you listen to your mom she'll be taken away by aliens. Women shouldn't work and should look after kids. Families should comprise of 1 mom and 1 dad in order to be successful. It's hard to know what the film is saying, because it just isn't articulate enough.

Mars needs more than just moms, but also a better script, funnier jokes and something to take it beyond genericness. Great visuals just doesn't cut it, however graphically impressive it may be with its astoundingly life-like animations. But I suppose with all the awesome CGI flicks we get, the price we have to pay is to endure a couple of mediocre ones every once in a while. This is one such "I'll watch it just to have seen it"-films. It got better by the end though, where it found its way into my heart with a very touching scene. Just too bad that everything that preceded it was such a mundane experience.