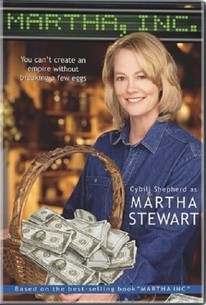 The casting of Cybill Shepherd as billionaire home-economics doyenne Martha Stewart in this made-for-TV biopic allegedly grew from a quip made by Today Show host Matt Lauer, that only three people were qualified to portray Martha: Shepherd, Candice Bergen, and Robin Williams (!). The film follows the traditional rags-to-riches route, as Martha rises from a poverty-stricken childhood in Nutley, NJ, to the head of a vast financial empire, largely founded upon her talent for whipping up inexpensive gourmet meals and her sagacious, tasteful home-decorating tips. (It is explained that this metamorphosis is borne of necessity, after Martha's lawyer husband, Andy [Tim Matheson], suffers a lengthy spell of unemployment.) Much is made of the contrast between the sweet, benign "public" Stewart and the hell-on-wheels "private" Stewart, and of course a great deal of footage is devoted to the Wall Street insider-trading scandal that brought about her spectacular downfall. Highlights include a vivid recreation of the confrontation between Stewart and TV host Jane Clayson on the set of CBS' Morning Show. Based on a best-selling book by Christopher Byron, Martha, Inc.: The Story of Martha Stewart first aired May 19, 2003, on NBC.

Mark I. Graham
as Tight Buns

Critic Reviews for Martha Inc.: The Story of Martha Stewart

Cybill Shepherd throws herself into the domestic diva with a hammy, scenery-chewing panache...

Audience Reviews for Martha Inc.: The Story of Martha Stewart

There are no featured audience reviews yet. Click the link below to see what others say about Martha Inc.: The Story of Martha Stewart!