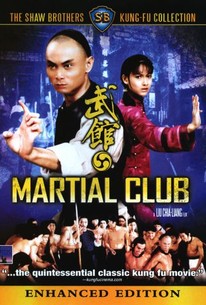 Lau Kar-leung directs this martial arts yarn about competing kung fu schools locked in a bitter rivalry. Meanwhile, the master of one school Huang Chi-ying (Ku Feng) is having a hard time controlling his son Wong Fei-hung (Gordon Lau Kar-fai) and his son's friend Yin-lin (Mai Te-lo) who get their kicks by posing a kung fu masters. Even after getting drubbed in a match with a real kung fu ace, the two continue to play the part, going so far as to hire opponents to take a dive. Soon Master Shan (Johnny Wang Lung-wei) of the rival Jing Wu school gets wind of Fei-hung's bragging and subsequently breaks Yin-lin's leg. Soon Fei-hung realizes that he must get serious and fight Shan in order to save his repudiation and that of his father's school.

There are no critic reviews yet for Martial Club. Keep checking Rotten Tomatoes for updates!

There are no featured reviews for Martial Club at this time.