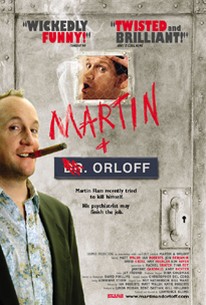 One of the few films you could call wildly uneven and the filmmakers would still consider it a compliment.

The movie and its players have a natural, matter-of-fact sense of comedy. It doesn't rub our faces in its jokes.

You'll chuckle at least once during the proceedings -- but probably not much more than that.

Provides a fairly steady series of laughs thanks to the fully committed performances by the two stars and the sheer brazenness of its humor.

Unless you find kicks in the groin hilarious, the lunacy here is considerably more tired than inspired.

Grows on you, as does stress-inducing, carefree Orloff on bemused Martin.

A refreshing, original departure from junk like Starsky & Hutch.

The saw about the shrink who's crazier than his patient gets a workout here, but it's given a likable spin by both of the leads.

While there are some inspired moments of merriment, the overall product leaves much to be desired.

Sure, it's not much more than a 'sketch after sketch' presentation, but one can forgive an aimless narrative when the gags are this unexpectedly funny.

There are no featured audience reviews yet. Click the link below to see what others say about Martin & Orloff!