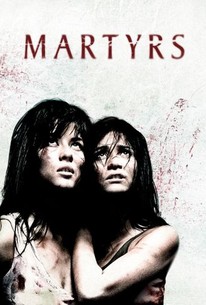 Critics Consensus: A real polarising movie, this Gallic torture-porn is graphic, brutal, nasty and gruesome and not to everyone's taste.

Critics Consensus: A real polarising movie, this Gallic torture-porn is graphic, brutal, nasty and gruesome and not to everyone's taste.

Critic Consensus: A real polarising movie, this Gallic torture-porn is graphic, brutal, nasty and gruesome and not to everyone's taste.

Tells the story of Anna, once a missing little girl, found wandering a year later on a country road virtually catatonic after suffering some sort of physical abuse. She grows into a comely young woman, but she's got serious issues. She also has a close friend, Lucie, who she ultimately calls after she finds herself in an unusual house in the middle of the forest. There's something very disturbing about the Bauhaus-esque home, something Anna can't quite put her finger on.

Robert Toupin
as The Father

Tony Robinow
as Doctor
View All

Martyrs is something of a horror milestone-a dire one to some, but a movie to be reckoned with all the same.

Martyrs has an intelligence and a dogged determination to do and to say what its predecessors could or would not.

it turns out to be concerned precisely with the nature and reception of extremity, posing uncomfortable questions about what it is that one really seeks in choosing to 'witness' scenes of horrific human abjection.

The air of pretentiousness and the whiff of lesbian chic suggest that the bunch of nihilists who produced this garbage will claim something for it. All it really demonstrates is that there is something seriously rotten in the state of France.

It will most definitely divide audiences, having already done so all over the world. But Laugier has contributed a brave, brutal and original horror film for all to witness.

The stylishly mounted first half zips along at a rate of knots while the gruesome make-up work will keep your gag reflex in violent spasm.

One of the most powerfully affecting horror films you'll ever see. Just don't be surprised if you walk away feeling empty inside.

Films at their best - and worst - continue to have tremendous power, and Martyrs is absolutely a film which encapsulates this.

Intense, disorienting, unsettling, upsetting, polarising - Martyrs is all these things, but it is also intelligent, moving and strangely transcedent. If you want to be put through the wringer by a film, make it this one.

The narrative wraps up on its own terms, leaving the viewer alone to ponder over precisely what just happened.

With Martyrs the horrifying imagery and gore are not the point or the source of entertainment ... It transcends the genre, and challenges the viewers to see beyond the horror.

This extremely disturbing and almost unwatchable exercise in extreme sadism is always gripping, given how it follows unpredictable directions at every moment until it reaches a surprising final act that demands too much from the audience for being so nihilistic and profoundly sickening.

'Martyrs' begins promisingly, telling the story of Lucie, a woman who escaped violent confinement as a child and has spent her life fighting the demons of her past whilst seeking those responsible for it. The film's exposition is undoubtedly entertaining with Lucie's first adult appearance (with a shotgun) being the highlight of the whole feature. As Lucie's plot, disappointingly, finishes by the films midpoint focus is then shifted to her long-term friend and partner in crime 'Anna'. From this point onwards 'Martyrs' sadly becomes pseudo-philosophical drivel in an attempt to give itself meaning and mask its little substantial intrigue. Alongside this the film often feels boring in moments and struggles with its shallow antagonists and missing direction. Overall it feels as if 'Martyrs' lost it way when it turned to Anna, and, although I truly enjoyed a few scenes I can't help but feel as if they would of worked better in a something less dishonest.

A young woman tormented by the psychological damage inflicted upon her by sadistic kidnappers seeks revenge with the aid of a childhood friend. Martyrs begins with quite an interesting premise; Mylene Jampanoi's damaged abuse victim is by far the most interesting character in the film and the first half of the story which centres around her state of mind and her friend's uncertainty as to her sanity is very intriguing. But being a "horror" movie, cue the half-baked twist and it degenerates into yet another repulsive torture-thon, the piss weak Outer Limits excuse for which is feeble even by the standards of the genre. Quite why anybody - women in particular - would find entertainment in watching a young girl being mutilated and brutalized I have no idea, but this so-called horror is just yet more tasteless, unpleasant torture porn with pretensions.

[img]http://images.rottentomatoes.com/images/user/icons/icon14.gif[/img] Martyrs is a film that features more unrestrained brutality and repugnant scens of torture than any low-budget horror released in a while, but along with all this comes a certain amount of intelligence. I think it's safe to say that a lot of the negative reactions this film has recieved are based on the suspicion that it's a completely screwed up horror film that could cause damage to people psychologically, and that it's aim is to push you to the limit and make you throw up internal organs or quite simply traumitise you so much it scars you for life. However although it has the power to do that. I found it to be anything but narratively-flimsy and immature, it's actually one of the best horror movies i've seen in a while. It philosophies religion, the afterlife, epiphany-esque visions, and of course the transcendence of pain itself. I think we've gotten so used to idiotic and empty movies like Hostel and Saw that even the art-house, much more intellectual and profound bloodbath's are viewed as the typical Grindhouse fare. Unlike said movies it has two absolutely fantastic lead performances by Morjana Alaoui and Mylène Jampanoï, beautiful cinematography, delicate and artful direction, and a sheer sense of anguish and terror that I think fans of horror cinema will really enjoy, and a reflective meaning. It has one of the most nasty final acts i've seen in a while and also a very creepy ending. If you love film, you'll adore it. If you like horror, you haven't seen anything until you've seen it. I humbly ask people who see this movie not to criticise it on the grounds of being messed up, judge something as infantile as Hostel on that. This film has a purpose, along with that comes physically manifested torture. I would even argue years from now even when this film is disowned by narrow-minded audiences that it's a movie about something but that something certainly isn't torture. I can't really recommend it as entertainment, but I suppose if you happen to come across the film you might see something brilliant if you can handle it.