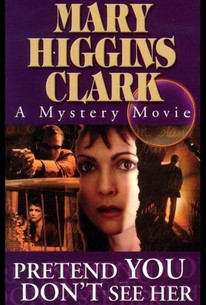 The first of the PAX Network's several TV-movie adaptations of the novels of Mary Higgins Clark, Pretend You Don't See Her begins when real estate agent Lacey Farrell (Emma Samms) witnesses a murder. Not long afterward, Lacey is placed in the Federal Witness Protection program, along with her spunky young niece Bonnie (Kim Poirier). Danger rears its ugly head when professional hit man Curtis Caldwell Blake (Hannes Jaenicke) gloms onto Lacey's new identity. Will detective Ed Sloan (Beau Starr) be able to rescue her in time, or is it up to Lacey to extricate herself from this perilous dilemma? Former police officer Sonny Grosso of The French Connection fame functioned as the film's co-executive producer and research consultant. A British/German/Canadian co-production, the Toronto-filmed Pretend You Don't See Her made its American TV bow on January 12, 2002.

There are no critic reviews yet for Mary Higgins Clark's 'Pretend You Don't See Her'. Keep checking Rotten Tomatoes for updates!

There are no featured audience reviews yet. Click the link below to see what others say about Mary Higgins Clark's 'Pretend You Don't See Her'!