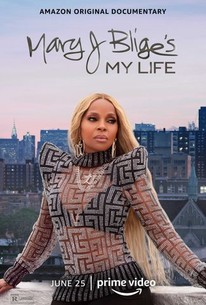 Nine-time Grammy (R)-winning recording artist and Academy Award nominated singer and actress Mary J. Blige set the music world on fire with her trailblazing 1994 LP "My Life," a collection of powerful confessionals about her battles with abuse, depression and addiction that forged a profound and enduring connection with millions of fans around the globe. In Oscar (R)-winning filmmaker Vanessa Roth's documentary Mary J. Blige's My Life, the singer, producer and actress reveals the demons and blessings that inspired the record and propelled her from the soul-crushing world of New York's housing projects to international stardom. In the process, she celebrates the 25th anniversary of her most influential work by performing the album live for the first time.

Taraji P. Henson
as Self

Alicia Keys
as Self

Mary J. Blige
as Self

Sean Combs
as Self

This new documentary is utterly riveting as Blige recalls a childhood marked by violence and abuse in a grim New York housing project, and how she emerged with deep psychological issues unprepared for the success of her debut album.

With "My Life," Blige saved herself -- and reminded her fans their selves were worth saving as well

We never really get a sense of where she's been, let alone My Life's musical and cultural context.

The sheen of a highly controlled narrative glosses over this 82-minute documentary.

Where the documentary succeeds most plangently is in its fan testimonials of the album's impact and Blige's emotional recollections of the songs' roots.

Despite its best intentions a surface-level puff piece--a feature-length commercial lacking in depth with platitudes substituting for insights.

The openness of Blige's music describes the crux of both the album and the documentary commemorating it, as that connection between herself and her fans is what's made her career so enduring.

Mary J. Blige's My Life is honest. Even though It may not go into specifics of the bad parts of Mary J. Blige's past, that's because it wasn't and never was about that.

My Life promotes empathy and perseverance...

Celebrates the lasting influence of an incredible album.

This movie affords an opportunity to set the record straight and finally answer those invasive and uncomfortable questions with her guard down and the wisdom and introspection that only come with age and experience.

We just wish the film could have been less repetitive, and more satisfying for her, as well as for us. But we appreciate her journey and her ability to make so many of her fans happy with her sadness.

There are no featured reviews for Mary J. Blige's My Life at this time.