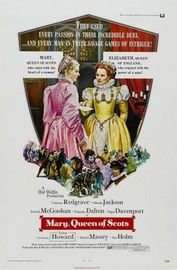 Sarah N
December 16, 2014
The tumultuous life of passion, betrayal, and death is wrapped in to a movie worth watching. Charles Jarrott captures the life of Mary, both queen of Scotland and France and her confrontation with her cousin Queen Elizabeth I. Everything about the movie pulls you in.

Xander S
½ November 1, 2014
Watchable, but it seems to be missing at least half an hour. The pacing is abrupt and the scenes frailly motivated, as if the filmmakers had given up trying to be accessible to any but the history buffs. Vanessa Redgrave lacks focus in the title role, playing her sometimes spoiled, sometimes imperious, other times terrified and other times in complete control. The script lacks the cleverness of Hal Wallis's other late historical dramas, notably "Becket," but there are some good performances--Timothy Dalton as Darnley is conniving and fascinating; Glenda Jackson's Elizabeth is, as always, regal and wise with a sense (in this case, a wicked one) of fun. Then there are John Barry's addictive score and enough lavish sets and costumes to shame the closets of the Royal Shakespeare Company. But even by the standards of costume dramas, this is stodgy, dry, and uneven.

Ashley H
½ May 7, 2013
Mary, Queen of Scots is an excellent film. It is about Mary Stuart who is the last Roman Catholic ruler of Scotland. Vanessa Redgrave and Glenda Jackson give amazing performances. The screenplay is well written. Charles Jarrott did a great job directing this movie. I enjoyed watching this motion picture because of the drama. Mary, Queen of Scots is a must see.

Guillaume H
½ March 10, 2013
this is THE cheese, historical soap opera. the two lead actress are terrific, the sequencing is epic and the dialogues... well like i said, THE cheese. erything is made so shakespearean and tragic, it makes me think historical dramatizations like that should be what populates the afternoon tv. it would be better for it. As cheezy , but better.

Indira S
½ June 30, 2012
finallly mary's side of story of this tragedy. watta sad story yet it has great ending her son rule and unite those two nation :)

Mara B
½ November 20, 2011
Excellent film for those that like historical dramas. Top notch acting.

Edith N
July 20, 2011
Pretty but Lacking in Understanding, Like the Queen Herself

The problem with the story of Mary Stuart (Vanessa Redgrave) is a tendency to over-romanticize. This is true of both the woman and the people who read her story. One of Anne's students in [i]Anne of Windy Poplars[/i] goes on at her about how she knows that Mary couldn't have had anything to do with the death of Darnley (Timothy Dalton). I have realized in later years that this is because she didn't know nearly as much about Mary and her court as I did at that age. Not because I'd studied more, but because a girl of that time and place wouldn't have been allowed to know that he was sleeping apart from Mary in the hopes that his syphilis cure would take. It's hard to avoid having a View on Mary, and that belief structure will colour everything you think about her. Your choice between believing she was a whore and believing she was a martyr will likely be influenced by your religion as much as by the evidence.

What can be agreed on is this. Mary was Queen of France until her first husband died. Her mother-in-law was Catherine de Medici (Katherine Kath), who did not want two dowager Queens in France. Mary returned to her native Scotland, the land she hadn't seen since she was a child, by this time in the care of her illegitimate older half-brother, James (Patrick McGoohan). Her cousin, Elizabeth I (Glenda Jackson), knew Mary was a threat to her own stability on her throne and did not want her there. She tricked Mary into marrying Henry Lord Darnley, another cousin of theirs, and it was a disaster. Her lords didn't like Mary's religion, and they just didn't like anything about Darnley. Darnley was involved in a plot to kill David Riccio (Ian Holm), and then the Earl of Bothwell (Nigel Davenport) was involved in a plot to kill Darnley. Both plots were successful, as was the earls' plot to overthrow Mary for her son. Mary fled to England, and all did not end well for her.

Screenwriter John Hale has seen fit to give us two meetings between the cousins, first when Mary arrives in England and then in her last days at Fotheringhay Castle. Supposedly, this is a pair of meetings so secret that even Elizabeth's own advisers didn't know she'd gone. Such a thing would have been impossible. Mary was never near enough to London for a visit from Elizabeth to have been possible without half the countryside knowing. Fotheringhay is about seventy miles from London, and while the website for a local inn boasts that you can get there from Kings Cross in about an hour, it would have taken considerably longer in 1587. Elizabeth would have needed enough people along on the trip that there was no way it would have worked. And to be honest, I feel it detracts from the reality. Elizabeth and Mary had been vitally important to one another as long as Mary was alive, and neither woman ever laid eyes on the other. Each relied on the words of others.

And, of course, it is arguably the words of others which doomed Mary. Each time she was "condemned out of her own letters," there was some doubt about the possibility of forgery. Elizabeth says that she does not want evidence against Mary forged, Walsingham (Richard Warner) goes along with it, and here, that's that. We are left to believe that no forgery took place, even though most of the sources I've read agree that, stupid though Mary might have been, she was never stupid enough to write what she is said to have written. It's also never really explored how Mary can have lived in the French court and yet been so politically naďve. This is largely because all we know about the French court from this movie is that Mary is no longer welcome there. It's also true that life in the French court could not have prepared Mary for the Scottish one or even the English one, but instead of thinking of her as dumb, inexperienced, foolish, or what you will, Mary here is Pure.

Oh, it's a lovely production for all that. The British have a distinct advantage when it comes to stories set so long ago; they couldn't film at Fotheringhay itself (it was dismantled in 1627), but they were able to film in a lot of places of equal vintage. The few scenes set in the French court were actually filmed at the Château de Chenonceau, once home of Diane de Poitiers, mistress of Mary's first father-in-law, and then home of Catherine de Medici, her first mother-in-law. The movie lost its "being pretty" Oscars to [i]Nicholas and Alexandra[/i], which I've not yet seen, but it certainly deserved the nominations at least. It bothers me that everyone seems to feel the need to embellish the stories of the Tudors (Mary's grandmother was a Tudor, the sister of Henry VIII), because the costumes and sets should be all the embellishment needed. The real stories are full of so much passion and intrigue that I don't get why anyone ever feels the need to add more.

Emma W
½ January 30, 2011
Very well acted and directed. A good dramatation of two of the most enigmatic and influential women of their generation! Worth watching!

Arnie L
September 2, 2010
The script is brilliant in parts and much less so in other parts.
Page 1 of 4