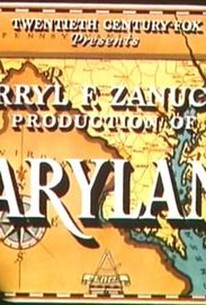 The success of 1938's Kentucky prompted 20th Century-Fox to come up with the similar (though not entirely identical) horse-racing opus Maryland. After her husband (Russell Hicks) is killed during a fox hunt, Maryland matriarch Charlotte Danfield (Fay Bainter) forbids her son Lee (John Payne) from ever riding or even owning a horse. Lee obedient only until he meets lovely Linda Stewart (Brenda Joyce), the daughter of his father's ex-trainer William Stewart (Walter Brennan, doing a virtual reprise of his Kentucky characterization). In concert with Linda, Lee enters his horse in the fabled Maryland Hunt, an annual steeplechase event. The outcome of the race is instrumental in weakening Charlotte Danfield's anti-equestrian stance, but Stewart, alas, isn't around long enough to fully bask in his restored glory. Much of Maryland was filmed on location, gorgeously lensed in Technicolor by George Barnes.

William B. Davidson
as John Addison

There are no critic reviews yet for Maryland. Keep checking Rotten Tomatoes for updates!

There are no featured reviews for Maryland at this time.