Master and Commander: The Far Side of the World2003

Master and Commander: The Far Side of the World (2003) 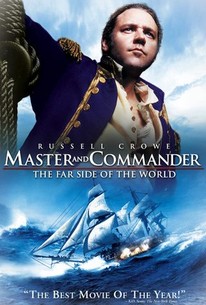 Critics Consensus: Russell Crowe's rough charm is put to good use in this masterful adaptation of Patrick O'Brian's novel.

Critics Consensus: Russell Crowe's rough charm is put to good use in this masterful adaptation of Patrick O'Brian's novel.

Critic Consensus: Russell Crowe's rough charm is put to good use in this masterful adaptation of Patrick O'Brian's novel.

Master and Commander: The Far Side of the World Videos

Master and Commander: The Far Side of the World Photos

Director Peter Weir's first turn behind the camera since 1998's critically acclaimed The Truman Show, Master and Commander: The Far Side of the World is based on two Napoleonic War-era adventure novels in author Patrick O'Brian's Aubrey/Maturin series, Master and Commander and The Far Side of the World. Russell Crowe stars as Captain Jack Aubrey, a high-seas adventurer who maintains a strong bond with ship-surgeon Stephen Maturin (Paul Bettany). After conquering much of Europe already, Napoleon's forces have set their sights on taking Britain, so Aubrey and the crew of his ship, the HMS Surprise, take to the Pacific to intercept any attacking ships from the French fleet. When Aubrey eyes a renegade French super-frigate, the Surprise pursues, leading to an adrenaline-charged chase through the distant reaches of the sea. Edward Woodall, James D'Arcy, and Lee Ingleby also star as members of the Surprise's crew. ~ Matthew Tobey, Rovi

News & Interviews for Master and Commander: The Far Side of the World

View All Master and Commander: The Far Side of the World News

Critic Reviews for Master and Commander: The Far Side of the World

We feel ourselves to be in good company with these men, and strangely jealous of their packed and salted lives.

Intense battle scenes and a strong story of friendship.

Thanks in no small measure to Perfect Storm designer William Sandell, this handsomely mounted actioner exudes the authentic tang of salt, sweat and gunpowder.

A quite sturdy and enjoyably romp through the ferocious Pacific high seas.

It never achieves the visual elegance or majesty that a David Lean might have provided. The story line isn't the freshest. And yet the film is satisfying all the same.

It seems the sea will keep churning and Jack Aubrey will be there to command his men to victory or a well earned death.

Despite the setting (a Royal Navy ship off the eastern coast of South America during the Napoleonic Wars) and the gore (blunt limb removal, exposed brains) the film is tender and poetic.

I can say most assuredly that it has already earned its place among the pantheon of classic war films and indeed the greatest films of all time.

There aren't too many films that can combine intelligence and thrills, but Master and Commander succeeds on both counts.

Written by Weir and John Collee, this is a faithful adaptation of the O'Brian novels told with a well-paced, rousing exuberance and uncommon intelligence and humanity, richly detailed in both character and action.

Marketed as a rollicking adventure at sea, "Master and Commander" instead is a disguised lesson in social history with just enough action sequences to make it palatable.

Audience Reviews for Master and Commander: The Far Side of the World

Interesting to see how naval battles were fought in the early 1800's. If only they knew then what we know now. To the chagrin of some of his senior crew, Cptn Jack Aubrey sets out to defeat a technically superior ship.

Master and Commander based on the Aubrey/Maturin novels by historical author Patrick O'Brian is, unfortunately a mediocre film that doesn't quite cut it. The books are terrific, filled to the brim with rich descriptions of that time. The novels are beautifully written, highly entertaining and above all brilliant. But, this is not the case with this film adaptation. Before, I go any further, I loved the look of the film, and I thought director Peter Weir captured the look of the period perfectly. Unfortunately, a good looking film doesn't necessarily mean it's a good film. Master and Commander is a mediocre film that could have been much better than this, considering that the books are wonderful. Despite the somewhat lacking material on-screen, the performances delivered by the actors, especially Crowe and Bettany are terrific. I've enjoyed what I read by Patrick O'Brian and love the historical aspect of his works. Unfortunately, Master and Commander is a boring film that nothing happens for long periods of time. Don't get me wrong, I absolutely love films where it takes time for the plot to unfold, but unlike the book, this film went nowhere. I saw this in the theatre and the audience seemed bored. Peter Weir is a good director, but with this film, he just doesn't cut it. Considering that the books are filled with adventure, action and are exciting to read; the film adaptation of Master and Commander could have been an exhilarating adventure film, and though it somewhat captures the essence of novel, this is a mediocre film that doesn't deliver what the books do so well. If you haven't seen this film, read the books instead, they're better and better conceived. Master and Commander for me was a disappointment.

2003 was an interesting year for nautical films. A revival of sorts almost happened, but not quite. In that year there was Pirates of the Caribbean: The Curse of the Black Pearl and this film. While that one was a rip-roaring action film that proved to be great for popcorn entertainment, this film takes a more intelligent and artsy approach, proving to be a technical masterpiece that will mostly appeal only to some, namely due to lots of quiet moments of dialogue, sparse action scenes, and a greater eye for attention to detail and period accuracy. This film has a story, and it's a good one, but it's not about the plot. It's more about the characters, namely the two principals: the strong captain played by Russell Crowe, and his friend- the ship's docter and naturalist played by Paul Bettany. Both are terrific in their roles, drawing apt comparisons to Sherlock Holmes and Watson. This is not a film for everyone though. A lot of people may find it boring, and I'll admit, there could have been another action scene or two, and some more development with some of the other characters, but all in all, I found this to be a very fascinating film. I know some but not a lot about the nautical world of this time period, but from what I do know, this film gets a great deal of it correct, and that's something I really appreciate. If you ever wanted to know about the ins and outs of being on a early 19th Century British warship, than this is the film for you. The film was nominated for many Academy Awards, but only came away with a couple. One of those, however, was for cinematography, and that one was well deserved. Then again, this is a Peter Weir film, so I kind of expected that. I also liked that the film used a mixture of techniques to get thingsdone, including models and replicas, instead of putting too great of a reliance on cg. Something I found quite striking was the music. There's not as much of it as you might think, adding to the atmosphere and setting greatly. If you want a movie that is both thrilling (at times), yet has very high artistic merits, then you really need to see this. Despite a few nitpicks, I thought it was amazing. There needs to be some sequels to this one, and I'm surprised they haven't happened yet. Someone make it happen.

Master and Commander: The Far Side of the World Quotes