The Master of Disguise2002 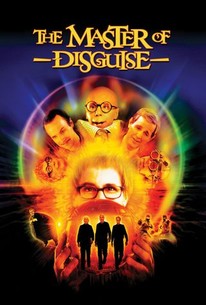 Critics Consensus: An ill-concieved attempt to utilize Dana Carvey's talent for mimicry, The Master of Disguise is an irritating, witless farce weighted down by sophomoric gags.

Critics Consensus: An ill-concieved attempt to utilize Dana Carvey's talent for mimicry, The Master of Disguise is an irritating, witless farce weighted down by sophomoric gags.

Critic Consensus: An ill-concieved attempt to utilize Dana Carvey's talent for mimicry, The Master of Disguise is an irritating, witless farce weighted down by sophomoric gags.

The Master of Disguise Photos

Dana Carvey ventures into the world of PG-rated, family-oriented entertainment as star and co-writer of this light adventure comedy, which requires the actor to assume more than three dozen different identities. Carvey's primary role in Master of Disguise, however, is that of Pistachio Disguisey, an ordinary waiter with a hidden, mostly untapped talent for transforming himself into any persona he wishes. When his kindly parents, Mama (Edie McClurg) and Frabbrizio (James Brolin), are kidnapped by the evil thief Devlin (Brent Spiner), the usually meek Pistachio is forced to rescue them. Enlisting the help of his grandfather (Harold Gould), Pistachio learns that he is one of a long line of family members to have the power of "Energico," a mystical means of changing one's identity to suit any given situation, and Pistachio learns to use these powers to their fullest to defeat Devlin and win back his folks. Carvey's original idea for Master of Disguise was helped to the screen by executive producer Adam Sandler, a buddy of his from their time on NBC's Saturday Night Live. ~ Michael Hastings, Rovi

Jessica Simpson
as Herself

Bo Derek
as Herself

Jesse Ventura
as Himself

Ava Metz
as Another German

Michael Johnson
as Himself

News & Interviews for The Master of Disguise

Does The Master of Disguise Deserve Cult Status?
50 Worst Summer Movies of All Time
Gondry and Jack Black Promise to "Rewind"

View All The Master of Disguise News

Critic Reviews for The Master of Disguise

In a 40-year career in horror, David Cronenberg never dreamed up an image as chilling or stomach-churning as Dana Carvey as a human turtle.

A film about as funny as a seeping wound.

Such a sad irony that Dana Carvey, who's made his name bringing celebrities to life with uncanny impersonations, should make such a lifeless movie based on characters of his own creation.

George W. Bush in the flesh would have been much funnier than this movie's impersonation.

While some of the make-up effects are mildly diverting (Carvey disguises himself as a turtle and a cherry pie), they hardly make up for the lame screenplay, barely coherent plot and increasingly desperate mugging.

If Carvey's looking for a comeback, then playing a cloying dimwit with an annoying accent isn't the place to start.

The humor here is relentlessly juvenile, and not even the kids in the audience seemed to like it much.

It is not as funny as it could be, and none of it makes sense, especially Pistachio's ability to mimic any dialect but standard US English. But his versatility is astonishing.

This is a bad flick that will appeal mostly to kids ranging from ages 5-11, but adults will leave halfway through. I found it almost tolerable.

This misfiring disaster shows just how over-estimated Carvey's writing and acting talent has been.

Audience Reviews for The Master of Disguise

The Master of Disguise is really the master. He use the disguise of a funny movie, but is just a sad way to lose time. Rotten.

It had his moments, but overall fails as a comedy. Grade: C-

I did like this movie, it is a stupid movie with no real point to the storyline but i have to say it does make you laugh the different characters he gets disguised as is funny and i have to say the best character is turtle man he is soo hilarious we were reciting it weeks after the movie so it is a film to watch but only if you just want a silly movie to easily follow and cheer you up!

The Master of Disguise Quotes