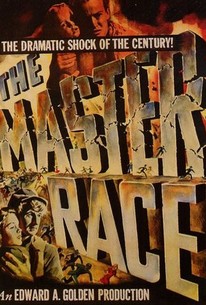 The Master Race argues persuasively that, although it appeared that the Nazis would lose WW2, it was foolish to assume that Hitler's legacy would not insinuate itself into the postwar era. Nazi bigwig Von Beck (George Coulouris) arrives in a small Belgian village on the eve of its liberation by the Allied troops. It is Von Beck's plan to foment disharmony and bigotry amongst the villagers, thereby laying the groundwork for a German victory in the next war. But Von Beck soon discovers that the populace isn't quite as gullible as the herrenvolk had been when Hitler rose to power. Still, the film ends with a warning: the only way to avoid future world conflict is to thoroughly crush the instigators of the present war. Ironically, after hostilities ceased, Herbert J. Biberman, cowriter-director of The Master Race, was castigated by the anti-Red brigades for being, among other things, a "premature anti-fascist."

Critic Reviews for The Master Race

A timely warning on rehabilitation in Europe with well sustained acting from the principals.

Biberman's film annoys by patting itself on the back for stating the obvious about the Nazi monsters.

Audience Reviews for The Master Race

There are no featured audience reviews yet. Click the link below to see what others say about The Master Race!