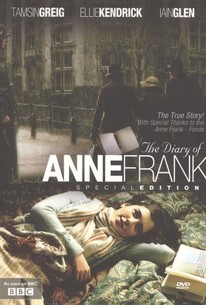 One of the most powerful, personal accounts of World War II ever recorded, The Diary of Anne Frank is adapted for the BBC by director Jon Jones and screenwriter Deborah Moggach. A German-born girl of Jewish descent whose family relocated to Amsterdam in 1933, Frank and her family hid out in her father's office during the Nazi occupation of the Netherlands, surviving for two years under cramped, crowded living conditions and relying on the kindness of others for basic living needs. During that time, the young girl eloquently documented her harrowing experiences in a diary purchased for her by her father, Otto. When the war was over, Otto was the sole surviving member of the Frank family. Returning to the space where they spent two of their darkest years, he discovered his daughter Anne's diary and decided to share it with the world.

Having just read the book, i found it a little slow. However with that being said this is one time where the book is always better doesnt apply. I enjoyed the movie better and got involved in the story more! Good cast expecially the performance from the actress who portrayed Anne! Mustve been hell for a young girl and well the rest of the 8 tenants of the Secret Annexxe to have no privacy for all that time, living in constant fear that they would be discovered by Hitler's Stormtroopers.

Anne is a headstrong, feisty, moody teenager who is growing up and becoming a woman under cramped living conditions for two years, hiding from the Nazis. I still like the diary better but this is perhaps the best film adaptation I've seen. There are such tender moments between family members and Peter, the boy whom Anne is very affectionate with.