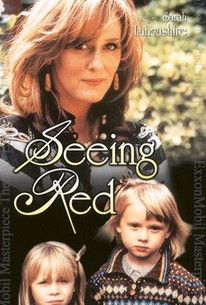 Sarah Lancashire, a leading player from the long-running British TV series Coronation Street, stars in this drama based on the memoirs of actress and children's activist Coral Atkins. Atkins (played by Lancashire) overcame a childhood of abuse and neglect at the hands of foster parents to become a British TV and theater star in the early 1970s. At the peak of her fame, Atkins attended a charity event at a children's home, and she was shocked to see the staff ignoring a little girl who was weeping uncontrollably. Reminded of the horrors of her own childhood, Atkins pledged to start a home for the sort of children that the foster care system was not equipped to deal with. As a divorced single parent trying to take on the bureaucracy of the children's services system, Atkins had a steep uphill battle, but in time she gave up her career to care for the children who meant so much to her. Originally produced for British television, Seeing Red received its American premiere on the PBS series Masterpiece Theatre.

Olwen May
as Harriet

Liam Tobin
as Bottom
View All

There are no critic reviews yet for Masterpiece Theatre. Keep checking Rotten Tomatoes for updates!

There are no featured reviews for Masterpiece Theatre at this time.