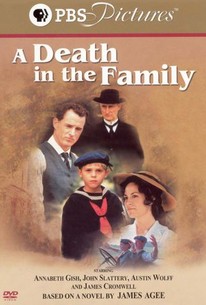 Adapted from James Agee's posthumously published, Pulitzer Prize-winning novel, Death in the Family is set in Knoxville, TN, in 1915. The death of husband and father Jay Follett (John Slattery) in a car accident has profound and long-reaching effects upon his wife, Mary (Annabeth Gish), and his sensitive, seven-year-old son, Rufus (Austin Wolff). At the core of the crisis is Mary's prickly relationship with her own family, exacerbated by her late husband's unwillingness to "go with the flow" in terms of religion and race relations. The kindly intervention of Mary's free-spirited artist brother, Andrew (David Alford), enables her and her son to go on with their lives. Told from Rufus' point of view, the novel version of Death in the Family had previously served as the source for the Broadway play and film All the Way Home. This production, filmed on-location in Tennessee, was telecast by PBS on March 25, 2002 as part of Masterpiece Theatre's "American Collection."

Dave Ducey
as Farmer
View All

Doesn't aim as high as the novel, but it succeeds overall in its quiet competence and modest intentions.

There are no featured reviews for Masterpiece Theatre's American Collection at this time.