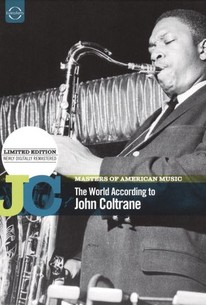 Saxophonist, composer, and bandleader John Coltrane has been almost as popular in death as he was during his lifetime. The prolific jazzman passed away at 40, but left a legacy of influential musical work. The World According to John Coltrane is one of the few documentaries to feature the background of this famous player. Directed by Robert Palmer, the hour-long release delves into Coltrane's beginnings starting with his childhood in North Carolina. It also showcases some live performances including the songs "My Favorite Things," "So What," and "Naima." Narration is provided by close friends and peers like Roscoe Mitchell and La Monte Young. Having recorded with masters Miles Davis, Thelonious Monk, and Ornette Coleman, Coltrane held his own and even surpassed the popularity of many of his contemporaries.

There are no critic reviews yet for Masters of American Music. Keep checking Rotten Tomatoes for updates!

There are no featured reviews for Masters of American Music at this time.