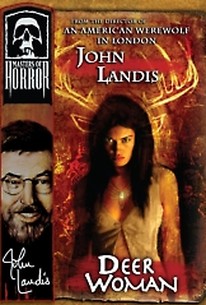 A burnt-out cop demoted to working the "weird calls" desk finally finds a mystery worth solving in director John Landis' gore-drenched entry into Showtime's Masters of Horror series. Detective Dwight Faraday (Brian Benben) is a troubled cop who has been relegated to desk duty following a tragic accident that resulted in the death of his previous partner. When Detective Faraday learns that a number of local men have been brutally slaughtered by massive blunt-force trauma apparently delivered in the midst of sexual arousal, he seeks out the comely Native American woman (Cinthia Moura) with whom each of the unfortunate victims was last seen. Now, as results of the autopsies reveal that each of the corpses was viciously trampled by what the doctors and morticians believe to be hooves, Detective Faraday is forced to consider that the murderer may not be as human after all, but a vengeful seductress of legend who is said to scour the land by night in search of amorous victims.

The omnipresent jokiness isn't enough to overcome the nagging pointlessness of this lighthearted monster movie lark.

Audience Reviews for Masters of Horror

There are no featured audience reviews yet. Click the link below to see what others say about Masters of Horror!