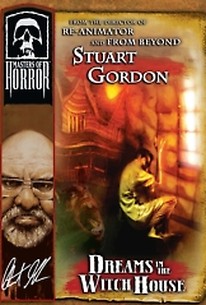 Stuart Gordon (Re-Animator, From Beyond) tackles the work of H.P. Lovecraft again for his episode of Showtime's Masters of Horror series, Dreams in the Witch-House. Ezra Godden, who starred in Gordon's Dagon, plays Walter, a grad student who, naturally, rents a room at a creepy old house. Bad signs abound, from the reclusive downstairs neighbor, Masurewicz (Campbell Lane), to the gruff, mean-spirited landlord, Dombrowski (Jay Brazeau). The room itself is kind of a hole. Then there's all that mysterious late-night pounding and chanting. But, hey, the rent's cheap. One night, Walter is awakened by screaming, and runs next door to find his attractive neighbor, Frances (Chelah Horsdal), and her little boy, Danny (David and Nicholas Racz), being terrorized by a large rat, which runs into a hole in the wall. When Walter goes to complain to the uncaring landlord, crazy old Masurewicz asks him if the rat had a human face! Things get even stranger. He has vivid dreams of a witch visiting him and seducing him, but the dreams leave real physical evidence behind. Walter, who is studying string theory, begins to suspect that there is a portal to another dimension within the building. Maybe old Masurewicz isn't so crazy after all. He seems to know all about the witch, and urges Walter to get out while he still can. But Walter suspects that the witch (with help from her familiar, that ugly rat), is after Danny's innocent blood, and, having developed a romantic attraction to Frances, he's determined to keep her and the boy safe.

Campbell Lane
as Masurewicz
View All

In these days of PG-13 horror films too timid to alienate their audience, it's nice to see that Stuart Gordon hasn't lost his knack for macabre impropriety.