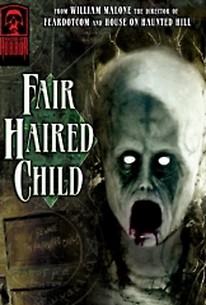 A teenage misfit is kidnapped by a strange couple and forced into a basement with their curious 13-year-old son in director William Malone's (House on Haunted Hill) entry into the Masters of Horror series. Tara is an outcast who withdraws into her comfortable world of fantasy rather than deal with the harsh realities of high-school life. One day, while riding her bike home from school, Tara is struck by a van and knocked unconscious. When Tara awakens in what she believes to be a hospital, the nurse tending to her (Lori Petty) tells the girl that she was found miles away from home before launching into a series of increasingly intrusive questions. Upon discovering that she is not in a hospital but a remote and isolated home, Tara is locked in the basement with 13-year-old Johnny. Though kind and sensitive on the surface, Johnny harbors a dark secret. As the pair struggles to escape their dark prison while discovering the cryptic warnings about a "fair-haired child" scrawled on the basement walls, it soon becomes obvious that it was fate, not chance, that brought Tara and Johnny to this dark and terrifying place.

Pushed forward by ever-shifting tonal and emotional gears, the surface of the film itself evokes the story's obsession with the metamorphosis of body, spirit and sexuality.