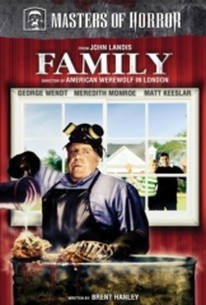 A successful young couple moves into a posh neighborhood inhabited by a killer who is far from the benign suburbanite that appearances would suggest in legendary horror director John Landis' second installment into Showtime's Masters of Horror series. David (Matt Keeslar) and Celia Fuller (Meredith Monroe) seem to have everything a young couple could want: good jobs, a great house, and plenty of money. David is a hardworking doctor and Celia is an investigative reporter with a knack for always getting to the bottom of the story. Upon moving into their new neighborhood, the Fullers soon make the acquaintance of their new neighbor Harold (George Wendt), an outwardly amiable single man who seems to be quietly occupied by his job and his hobbies. One night while drunkenly driving home from dinner, David and Celia jump the curb and slam into Harold's mailbox. After inviting Harold over for dinner in hopes of making amends for their clumsy transgression, the couple soon reveals that they have moved into the new neighborhood in a bid to recover from the recent loss of their young daughter. As the pair gradually becomes better acquainted with their jovial neighbor, it soon becomes obvious that all involved have their fair share of dark secrets.

John B. Scott
as Grandpa

Frances Flanagan
as Housewife
View All

If not as blatant as that found in last year's Homecoming, Family nonetheless boasts a sly political critique.