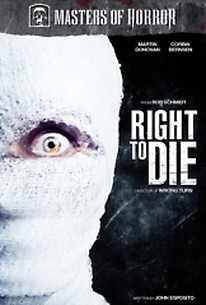 The husband of a woman whose flesh has been so horribly charred that she is completely comatose but technically still alive is haunted by her violent apparition as he attempts to make the difficult decision whether or not to end her suffering in Wrong Turn director Rob Schmidt's contribution to season two of Showtime's Masters of Horror series. In medical terms, Abby may technically still be alive, though anyone unfortunate enough to have suffered such a grisly, fiery fate as she would most certainly wished they had died. Now, as Abby lies catatonic in her hospital bed, her guilt-ridden husband, Cliff (Martin Donovan), struggles to get the court order that will allow him to bring his wife's misery to a merciful end. Now, as Abby's condition begins to deteriorate, her vital signs continually flatline and doctors race to revive her each time. Though they are repeatedly successful in their efforts, each time Abby dies her apparition appears to lash out against those who appear to be taking advantage of her dire situation. Each time the specter appears, it is more powerful than before, and now, should Cliff attempt to turn off her life-support system, he too will become a target of his wife's supernatural wrath.

On numerous levels, Schmidt has created a Masters of Horror that counts as an out-of-body experience.