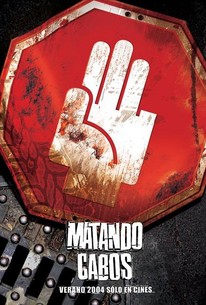 Fans of man-eating midgets, incompetent criminals, and violent ex-luchadors will find plenty to cheer about in director Alejandro Lozano's vibrant and comedic thriller that was awarded "Favorite Movie," "Favorite Actor," and "Most Bizarre Sex Scene" at Mexico's 2006 MTV Movie Awards. Oscar Cabos is a wealthy entrepreneur who is well known for his violent temper. When two men kidnap the unconscious Oscar as another team of criminals embark on their own quest to capture the despised millionaire, the chaos that erupts leads all involved on a wild chase through the streets of Mexico City. Highly stylized and endlessly energetic, Lozano's non-stop joy ride is certain to appeal to Quentin Tarantino fans and lovers of extreme international cinema alike.

There are no critic reviews yet for Matando Cabos. Keep checking Rotten Tomatoes for updates!

Clever and unpredictable Mexican movie!! Excellent direction, funny from start to ending, even the tragic is funny. Good cast and acting. You will feel like watching a Tarantino's movie, specially Pulp Fiction.