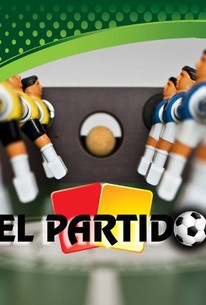 The first film by Mick Davis, The Match is a contemporary romantic comedy set in the idyllic village of Inverdoune nestling in the Scottish Highlands. Wullie Smith is the shy milkman who carries the physical and emotional scars of a childhood tragedy and who is in love with Rosemary, the beautiful daughter of Bill Bailey, a local farmer with a curious affection for cows. Rosemary has returned briefly to Inverdoune after five years away at a university and intends to leave again to pursue her career in the big city. Wullie's impossible dreams are fueled by his friend Buffalo, a semi-alcoholic American who was left behind when his USAF unit moved on. The village has only one street, but two pubs: Benny's Bar, owned by Big Tam, meeting place of the eccentric clientele, and L'Bistro, a place of sterile modernity owned by narcissistic Gorgeous Gus. The soccer teams of each bar have been carrying on a feud for 99 years and Benny's Bar has been losing all the games. But it is the result of the centenary game that determines the future of Benny's Bar.

Critic Reviews for The Match

There are no critic reviews yet for The Match. Keep checking Rotten Tomatoes for updates!

There are no featured reviews for The Match at this time.