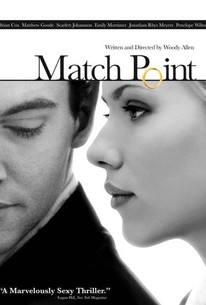 A clandestine love affair sends one man's charmed life into a tailspin in this dark, disturbing drama written and directed by Woody Allen, his first film set and shot in Great Britain and one his few films sans any humor. Chris Wilton (Jonathan Rhys-Meyers) is an Irish tennis player with an impoverished background. Just accomplished enough to make his way onto the professional circuit, but not skilled enough to be a consistent winner, he now works as an instructor at a London tennis club. The wealthy Tom Hewett (Matthew Goode), who is as impressed by Chris's charm and good looks as he is by his game, takes a tennis lesson from the young man. Chris's intelligence and wit also make a strong impression on Tom's pretty sister, Chloe (Emily Mortimer), who soon falls for him. It isn't long before Chris and Chloe are engaged to be married, a match that pleases both Tom and his father, Alec (Brian Cox), a successful businessman who believes Chris has a bright future in his firm. However, Chris also feels an overwhelming attraction to Nola Rice (Scarlett Johansson), a sexy blonde from the United States who is dating Tom. Though Nola initially puts up some resistance, Chris gently nudges her in the direction of an affair. Passion soon ignites between the two, and they have a one-time sexual encounter, even as Chris and Chloe plan their wedding. Nola resists, however, when Chris makes additional attempts to wheedle her into bed. Nola drops out of Chris's life shortly before his wedding, but a chance meeting a few months later resurrects the relationship as Chris and Chloe try to start a family. Match Point received its world premiere in an enthusiastically received presentation at the 2005 Cannes Film Festival. ~ Mark Deming, Rovi

John Fortune
as John the Chauffeur

Steve Morphew
as Stand-In
View All

The change of locale from New York to London has done Woody Allen a world of good. As has oft been said, Match Point is his best movie since ... fill in the blank.

His first film set in London, it boasts a young, pretty, something-for-everyone cast. As enter-tainment, however, it just slams limply into the net every time.

The plotting lacks a necessary sense of tragic propulsion; it feels dutifully schematic, its ironies polite and tidy when they should be bitter and merciless.

Woodyâ(TM)s best for ages. Even for non-Allen fans this has all the appeal of a good story well told and capped with a deliciously vicious little twist.

With Match Point, Woody Allen has made a perfectly nice little film -- one that, despite lacking originality, is fresh in the sense that it was filmed in England, far from his beloved Manhattan,

A glorious ride, with touches of Hitchcock, Patricia Highsmith and Woody Allen sprinkled through a film whose panoramic views of contemporary London are the next-best thing to a budget-weekend escape flight.

A mesmerising mix of moral drama and dark humour, with a shock ending to die for.

A finely tuned comeback worth celebrating.

...one of the venerable writer/director's more accomplished efforts in this new century.

But, perhaps, the greatest parallel between Woody's Match Point and Hitch is duality. It's a brilliant device.

Fascinating take on Dostoevsky's Crime and Punishment where Woody Allen... who am I kidding... Scarlett Johansson. That is all.

This film features what is probably my favourite Scarlett Johansson performance, darkly sexy, and the film takes full advantage of the emerging (at the time) actors in its cast, including Jonathan Rhys Meyers, Emily Mortimer and Matthew Goode. In addition to its noirish plot, there's an engaging story about social class that bubbles to the surface, and the movie's tone is consistent, amping up the drama of each successive action. Many called Match Point a return to form for Allen, (after his moribund late-90s), and I have to say, I agree; the hunger with which this film was produced shines through, leaving a primal document, in the end, with a climax that's (overused word alert) riveting... actually riveting. It's a film unlike pretty much anything else Woody has done... so even if you're not a fan, you should probably see it.

The opening sequence is probably one of the most philosophical ones director Woody Allen has created over the years. Its smart and stands apart from Allen's other films. For a different Woody Allen, congrats.

If I'm not mistaken, I do believe this this is my first time seeing one of Woody Allen's purely dramatic films. And I must say, I'm not disappointed. My viewing experienced was a bit tarnished by a few unfortunate interruptions, so perhas I should rewatch it, but nonetheless, I found this to be a really engrossing film. Chris is a recently retired tennis player who fidns himself among the upper crust of British society after he mankes friends with a guy named Tom. Chris begins a relationship with Tom's older sister Chloe and eventually begins an affair with Tom's fiancee Nola- an American who's a struggling actress. That's the basic set up: guy has an affair and tries his best to keep his life from unraveling as a result of all that is going on around him such as his becoming a workaholic and him and his wife havign difficulty conceiving a child. While the broad plot is nothing new, the way it is done feels fresh and seems spectacular, because that's how strong of a filmmaker Allen is. The film seemed very literary and operatic toi me, and indeed opera palys a huge role, as does literature, as research tells me this is Allen's take on Crime and Punishment, as well as a call back to his earleir film Crimes and Misdemeanors. When this came out, it marked a change of pace for olel Woody as it was his first time working with a predominately non-American cast, his first time working with Scarlett Johansson, and his first film done in the U.K. It's also rather dark, and frankly rather nihilistic, especially towards the end. This caught me off guard a bit, but I think this was a neat way to handle things. It also comes off as more classy and intelligent than most films that deal with this sort of subject matter, but it could just be because it's Woody. Who knows? The cast are quite good. Johansson is terrific as always, Jonathan Rhys Meyers is really wonderful, and Emily Mortimer and Matthew Goode are both pretty decent. Putting in a nice little supporting role is Brian Cox, and he's always a good choice, so props there as well. I've never really found Allen's films to be all that showy or stylistic from a cinematic perspective a la Mann or Scorsese, for example, but the sequence involving murder and the escape really floored me, and is a nice little stirring and rather brilliant piece of work in and of itself. In fact, besides getting interrupted a few times, my only real complaint is the inclusion of the dream sequence stuff near the end. It's not bad, but it inda took me out of the moment and I don't think it worked as well as it should have. Maybe it should have just been left out or that sort of thing should have been done throughout the whole film. All in all, this is quite a film. Here's to hoping Allen's previous dramatic works (or predominately dramatic ones like this) and any he does from now on are as strong as this. Definitely give this one a look.