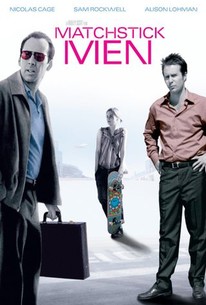 Critics Consensus: Breezy and well-acted, Matchstick Men focuses more on the characters than on the con.

Critics Consensus: Breezy and well-acted, Matchstick Men focuses more on the characters than on the con.

Critic Consensus: Breezy and well-acted, Matchstick Men focuses more on the characters than on the con.

Ridley Scott directs the crime comedy Matchstick Men, based on the novel of the same name by Eric Garcia. Neurotic con man Roy (Nicolas Cage) suffers from several emotional problems, including obsessive-compulsive disorder. He and his partner Frank (Sam Rockwell) swindle people out of money by posing as money collectors who promise things like tax refunds, package vacations, and other fabulous prizes (which they never get). Frank wants to pull a really big job, but Roy is too consumed with fear and panic attacks to join him. Only cigarettes and his trusty illegal prescription drugs seem to keep him going. When Roy finds himself in desperate need of more pills, he is forced to see legitimate psychotherapist Dr. Klein (Bruce Altman). Roy ends up talking about his emotional damage from a troubled marriage and divorce, which results in the discovery of a child whom he has never met. Dr. Klein suggests that he spend a weekend with the kid, so in walks teenaged Angela (played by twentysomething Alison Lohman). Reluctant to develop his role as a father, Roy also gets heavily involved in Frank's ambitious swindle. ~ Andrea LeVasseur, Rovi

Bill Saito
as Pharmacist No.1

Tim Maculan
as Pharmacist No.1

Stoney Westmoreland
as Man on Line

E.T., Best in Show, and More Certified Fresh Movies on Netflix and Amazon Prime
Rank Ridley Scott’s 10 Best Movies
Critical Consensus: A Brave New "World," A "Step" Down, And No Screenings for "Pulse" and "Zoom"

Matchstick Men glides from comedy to suspense to poignance, arriving at a destination you might not suspect...Fun while it lasts, but it's a bit of a con job itself.

This is a movie about con games at every level.

Matchstick Men never really casts off its cloak of artificiality and calculation; its pleasures are minor, however distracting they may be.

Scott tucks away his visual athletics in favour of something leisurely and quietly devastating. It's ultimately far more cunning a script than we can reveal here.

Ridley Scott lets us enjoy the satisfying clicks and whirrs of the well-oiled celluloid con trick, while leaving plenty of head room for Cage to twitch and fret in.

A lot more fun than most of the director's pompously inflated output.

Matchstick Men -- a nice strong balance of laughter and melodrama that envelops you like A Summer Wind.

Nicholas Cage gives his best performance since "Leaving Los Vegas" as con man Roy Waller in this sophisticated movie about familial responsibility, self-imposed barriers and the possibilities of a well executed long con.

A cleverly planned switcheroo story in which the twist at the end is the knife in the back.

Matchstick Men works because of the way the key players handle the material. This is the work of professionals acknowledging a good story and knowing better than to get in the way.

Something less than the sum of its parts, Matchstick Men is a decent film that should have been a considerably better one.

What saves Matchstick Men from being a complete washout are the performances by Cage, Sam Rockwell and Alison Lohman.

Ridley Scott's con movie outing is charming, but overplayed, which serves to give away the ending long before the end. Kinda ruined it for me. And the main con in the piece never questions the actions of his subordinates, which he calmly tells us, is his main job. And so, meh.

Cage gives a great performance as an obsessive compulsive con artist, Alison Lohman is good as Angela, and Sam Rockwell as just as good as he normally is in roles like this. it's a good attempt at a dramedy by director Ridley Scott, and the film is both well paced and well written.

A complex, very involving drama, "Matchstick Men" displays fantastic lead performances from its main cast comprised of Nicolas Cage, Sam Rockwell and Alison Lohman, but also heightens director Ridley Scott to a whole new form of filmmaking where he shows that he can tell a story more through genuine character development than the actual job the film centers on.

Surprisingly solid acting by Nic Cage in this one, matched by a character driven story with a con sprinkled in. Very light but enjoyable throughout -- a great movie for some laughs on a Friday or Saturday night.