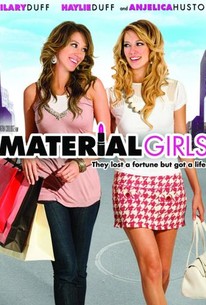 Critics Consensus: Plagued by paper-thin characterizations and a hackneyed script, Material Girls fails to live up to even the minimum standards of its genre.

Critics Consensus: Plagued by paper-thin characterizations and a hackneyed script, Material Girls fails to live up to even the minimum standards of its genre.

Critic Consensus: Plagued by paper-thin characterizations and a hackneyed script, Material Girls fails to live up to even the minimum standards of its genre.

Stripped of their wealth and forced to fend for themselves when the multi-million-dollar cosmetics company inherited from their father suffers due to controversy, two sisters who have never known the simple life must finally find out how the other half lives in a high-fashion comedy about hard times starring Hilary and Haylie Duff. Ava (Haylie) and Tanza (Hilary) are teen heiresses whose charmed lives consist of little more than showing up at all the hottest celebrity parties and putting in the occasional cameo at their company's board meetings while letting the responsible adults in charge handle all of the complicated details. All of that changes, however, when an unforeseen scandal robs the privileged "celebutantes" of their car, their cash, and even their lavish home; but what's a poor little rich girl to do when everything she's ever known is suddenly made null and void? In the case of Ava and Tanza, the only answer is to use their substantial setback as a means of realizing their true potential, and put the wisdom imparted to them by their father to use in clearing the family name and proving that there's much more to life than the almighty dollar.

Carson Brown
as Girl at Tribute

Lessons about social responsibility are submerged in a bubble bath of innocent glamour; Amy Heckerling's Clueless looks like a mordant social satire by comparison.

Under the circumstances, Anjelica Huston and Lukas Haas manage not to embarrass themselves, but only because they're pretending to be in a different movie.

The film's sole purpose is to promote, with chilling lack of irony, Hilary Duff's own brand of perfume -- oh, and there's her single as well.

Haylie and sister Hilary Duff just don't have the comedy stylings to sell this half-baked story of heiress sisters battling to save their dad's cosmetics empire from ruin.

The villain (a greedy corporate man of some sort) isn't very fleshed out, but it's hard to believe that he's any worse than the two self-serving, appearance-obsessed protagonists, with whom the film asks young girls everywhere to identify.

Even Anjelica Huston as a rival cosmetics magnate struggles to inject any venom into the proceedings.

Welcome to adulthood, Hillary and Haylie Duff. Here are your T-Mobile Sidekicks and Tabloid news stories. Leave your personalities at the door.

A brain-numbing, fluffy flick for tweens.

An insipid mess not worthy of the tweens who flock to such flicks.

Fans of the Duffs finally have a film to look forward to while they're doing their nails and staring off into space.

Along the way, self-discovery bangs 'em over the head.

I was a tween when I watched this, so I liked it more then than I realise I do now. I wouldn't say it was a disastourous film but it wasn't one of Hilary Duff's best. It's your average chick flick although does educate you on how money isn't everything and the people in your life are much more important and worth more than money ever will be.

This film was weak all over. 1not a good plot 2 not good acting.