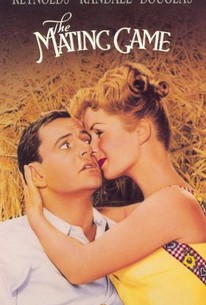 In this romantic comedy, a buttoned down tax investigator (Tony Randall) is called to investigate the finances of a small farm owner. He receives a call about Pop Larkin (Paul Douglas) involving non payment of taxes. Larkin's conniving neighbor has placed the call in hopes Pop will be jailed and his land sold at auction. Randall falls for Pop's daughter (Debbie Reynolds) and tries to resolve the families money problems.

Critic Reviews for The Mating Game

Audience Reviews for The Mating Game

Debbie and Tony team well in this cute comedy.