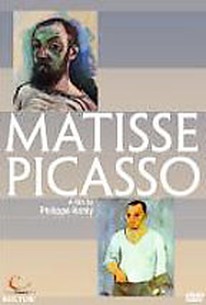 Though they were as aesthetically and stylistically different as night and day, Pablo Picasso and Henri Matisse shared a status as undisputed giants of modern art. This documentary takes that shared status as a thematic foundation, and also the seldom-discussed fact that the two men were close friends who shared a great deal on a personal level; Their friendship evolved from the mutual recognition and conviction that they were artistic equals. With his program Matisse Picasso, documentarist Philippe Kohly springboards from these facts into an exploration of the men's lives and the ways in which they continually intersected. Françoise Gilot (b. 1921) -- the companion and romantic partner of Picasso from 1945-1953 and the mother of two of his children (Claude and Paloma) -- was privy to the men's meetings, and fully participated in the making of this documentary; she appears as an on-camera contributor and discusses the basis of their relationship, namely the fact that each wanted to understand the other's creative processes and modes of thought. Others who bore firsthand witness to the men's exchanges also turn up for insightful and revealing commentary in this program, including Claude Picasso, Jacqueline Matisse-Monnier, Maya Widmaier, and Matisse biographer Hilary Spurling. Director Kohly supplements the newly shot interview footage with archival photos and film, and on-camera views of their work, to examine the ways in which their paths intersected and diverged, and how they influenced one another creatively. ~ Nathan Southern, Rovi

There are no critic reviews yet for Matisse & Picasso. Keep checking Rotten Tomatoes for updates!

There are no featured reviews for Matisse & Picasso at this time.