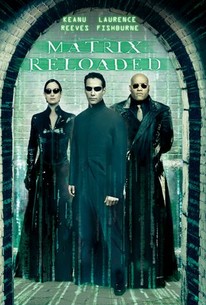 Critics Consensus: Though its heady themes are a departure from its predecessor, The Matrix Reloaded is a worthy sequel packed with popcorn-friendly thrills.

Critics Consensus: Though its heady themes are a departure from its predecessor, The Matrix Reloaded is a worthy sequel packed with popcorn-friendly thrills.

Critic Consensus: Though its heady themes are a departure from its predecessor, The Matrix Reloaded is a worthy sequel packed with popcorn-friendly thrills.

After creating an international sensation with the visually dazzling and intellectually challenging sci-fi blockbuster The Matrix, the Wachowski brothers returned with the first of two projected sequels that pick up where the first film left off. Neo (Keanu Reeves) and Trinity (Carrie-Anne Moss) have been summoned by Morpheus (Laurence Fishburne) to join him on a voyage to Zion, the last outpost of free human beings on Earth. Neo and Trinity's work together has been complicated by the fact the two are involved in a serious romantic relationship. Upon their arrival in Zion, Morpheus locks horns with rival Commander Lock (Harry J. Lennix) and encounters his old flame Niobe (Jada Pinkett Smith). Meanwhile, Agent Smith (Hugo Weaving) has returned with some surprises for Neo, most notably the ability to replicate himself as many times as he pleases. Neo makes his way to The Oracle (Gloria Foster), who informs him that if he wishes to save humankind, he must unlock "The Source," which means having to release The Key Maker (Randall Duk Kim) from the clutches of Merovingian (Lambert Wilson). While Merovingian refuses to cooperate, his wife, Persephone (Monica Bellucci), angry at her husband's dalliances with other women, offers to help, but only in exchange for a taste of Neo's affections. With The Keymaker in tow, Neo, Trinity, and Morpheus are chased by Merovingian's henchmen: a pair of deadly albino twins (Neil Rayment and Adrian Rayment). Filmed primarily in Australia and California (the extended chase scene was shot on a stretch of highway build specifically for the production outside of San Francisco), The Matrix Reloaded was produced in tandem with the third film in the series, The Matrix Revolutions. ~ Mark Deming, Rovi

Gloria Foster
as The Oracle

Randall Duk Kim
as The Keymaker

Helmut Bakaitis
as The Architect

Neil Rayment
as Twin No. 1

Adrian Rayment
as Twin No. 2

David A. Kilde
as Agent Jackson

Socratis Otto
as Operator on the Vigilant

David No
as Cain

Noris Campos
as Woman With Groceries

Marlene Cummins
as Another Old Woman At Zion

Andrew Valli
as Police No. 1

Andy Arness
as Police No. 2

Nash Edgerton
as Security Guard No. 5

Damon White
as dancer
View All

Critic Reviews for The Matrix Reloaded

The sfx bombardment can't hide a lack of sense and substance.

The whole film may be more than a bit suspect cerebrally, with dime-store philosophy, potted mysticism and cut-price otherworldliness, but visually it gives full value as a virtuoso workout for your senses.

Indeed, if you loved the first Matrix and its mix of comic-book angst, martial arts, virtual reality, video-game punch-ups, pop philosophy, biblical subtext, romance, tragedy and pathos, then you won't be disappointed.

If you're 14 or younger in age or sensibility, you may giggle at some of the bons mots.

Worryingly, the longer this movie goes on, the harder it is to care.

While not the all-guns-blazing 5-out-of-5 its predecessor was I still find The Matrix Reloaded a fun film, full of a fun sci-fi plot and plenty of crazy action sequences.

They don't come up with anything new, but it's bigger, louder, and mighty impressive, even if the dialogue sounds more and more like a preprogrammed video game.

Everything I wanted in a Matrix sequel

Though introducing some new ideas and characters, Matrix Reloaded is not as exciting as the 1999 original, suffering from problems that often inflict middle chapters of trilogies.

Not one of the worst sequels that has ever been put in movie theaters, and not one of the most disappointing... but, is it ever a grind.

The encoded bloom is off the digital rose in The Matrix Reloaded. [Blu-ray]

Audience Reviews for The Matrix Reloaded

A solid sequel that expands the scope of the resistance and the rules of its universe in a way much greater than before, although the result is too action-driven (with endless, tedious fight scenes full of CGI that go on forever) and even the religious references are a lot more obvious.

Its not amazing but the action scenes are so cool!

Good, but not even close to being in the same league as the first film.